India   All India  14 Sep 2019  2 UP cops charged with murder for thrashing man over alleged traffic violation
India, All India

In a video that had gone viral, two cops in uniform were seen thrashing a man as a child look on, terrified. 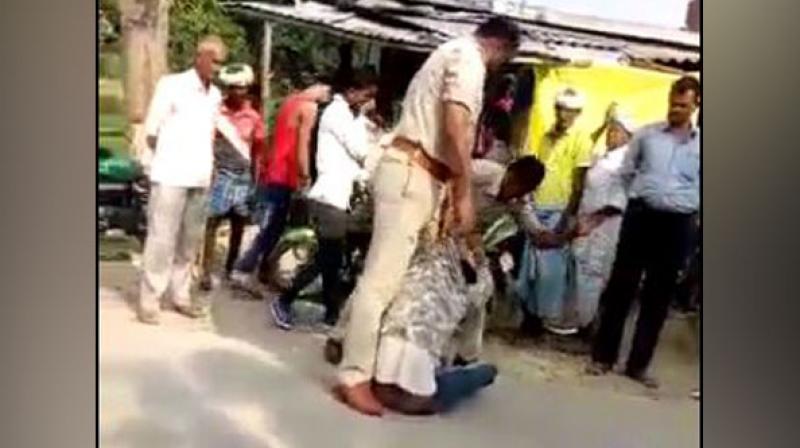 The video which was recorded by a bystander shows sub inspector Virendra Mishra and head constable Mahendra Prasad beating him up and verbally abusing him. (Photo: ANI)

New Delhi: The two cops who were suspended for thrashing a young man in Uttar Pradesh's Siddharth Nagar, have been charged with trying to kill the man.

In a video that had gone viral, two personnel were seen slapping and hurling abuses at a bike driver while a child with him looked on.

The terrified child stood near the bike as the two dragged the man on the road while kicking and slapping him brutally.

Rinku Pandey, who was riding the motorcycle allegedly got into an argument with the police personnel when they stopped him to check his papers, NDTV reported.

The video which was recorded by a bystander shows sub inspector Virendra Mishra and head constable Mahendra Prasad beating him up and verbally abusing him.

One of them is also seen sitting on him after he is pushed to the ground.

He kept asking what his fault was in the video and the cops are also seen snatching the keys from him when he refuses to do so.

Senior police officer, Dharam Veer Singh that the behaviour of the cops was "disgraceful" to the police department.