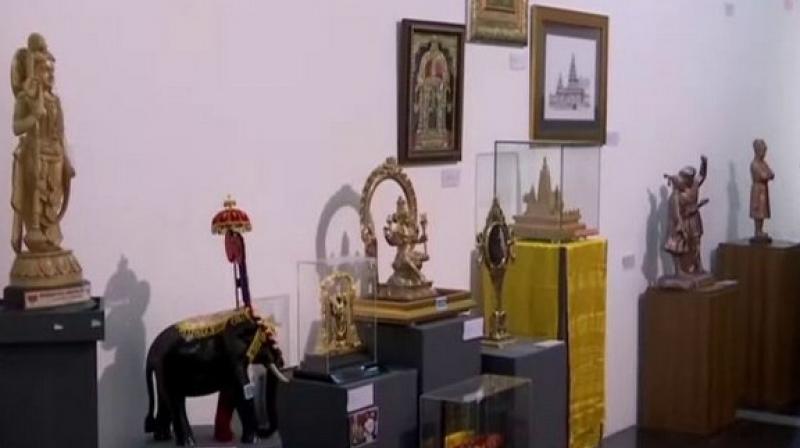 In February this year, over 1,800 mementoes that PM Modi had received were sold. (Photo: ANI)

New Delhi: The auction of gifts presented to Prime Minister Narendra Modi in the last one year has begun today at the National Gallery of Modern Art and is scheduled to go on till October 3.

"Continuing a practice I have always believed in! All those gifts and mementoes I have received in the last one year would be getting auctioned starting today till 3rd October. These mementoes would be on display at the NGMA near India Gate in Delhi. Do visit to have a look!" the Prime Minister tweeted on Saturday.

"There would also be an e-auction of the gifts and mementoes. The proceeds from the auction will be devoted towards the Namami Gange Mission. It would contribute to a cleaner Ganga. Do visit this site and take part in the auction," he added.

The auction was inaugurated by Union Minister of State for Culture and Tourism Prahlad Singh Patel in which a total of 2,772 mementos gifted to Prime Minister Modi have been displayed.

"This auction is from September 14 to October 3. People can also bid on the products online," Patel told ANI.

"The first twenty highest buyers will receive a letter of appreciation from our Prime Minister. Total 2,772 products have been displayed here," he further added.

The Director of National Gallery of Modern Art, Ritu Sharma said, "All the gifts that the Prime Minister has received from last six months have been displayed. People can visit PM mementoes website to buy the products. Prices of the products start from Rs 200 to Rs 2.5 lakh. All the biddings will be finalised on October 3."

In February this year, over 1,800 mementoes that PM Modi had received were sold.

Even as Chief Minister of Gujarat, Modi used to auction mementoes received by him, a practise which he has continued after taking charge as Prime Minister.