Television news channels showed her carrying a couple of bags as she walked towards the car, boarded it and left. 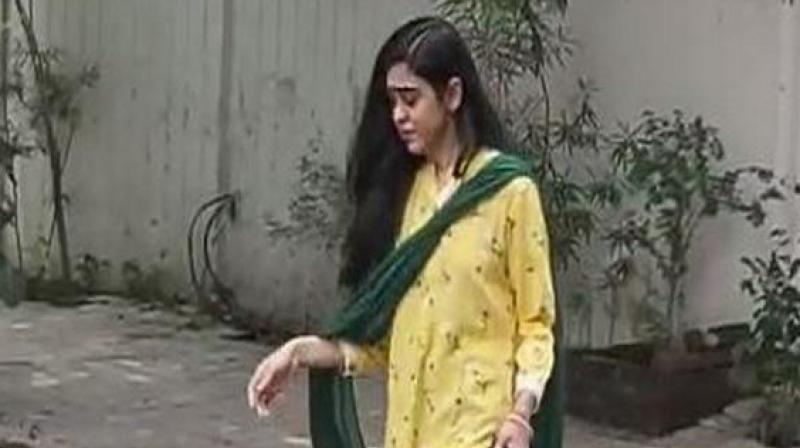 After a few minutes, Aishwarya was seen walking out of the house hurriedly, wiping tears with the dupatta she was wearing along with a yellow salwar suit. (Photo: ANI)

Patna: The estranged wife of RJD chief Lalu Prasad's elder son Tej Pratap Yadav was on Friday seen storming out of the house of her mother-in-law Rabri Devi with tears in her eyes.

Although Tej Pratap's divorce petition filed six months after their marriage in May last year is pending before a court, his wife Aishwarya Roy has been known to spend a lot of time at her in-laws' place which is a few hundred metres from the house of her father, RJD MLA Chandrika Roy.

However, an hour after Aishwarya reached Rabri Devi's 10, Circular Road residence, in the afternoon on Friday, her car was summoned.

After a few minutes, Aishwarya was seen walking out of the house hurriedly, wiping tears with the dupatta she was wearing along with a yellow salwar suit.

Television news channels showed her carrying a couple of bags as she walked towards the car, boarded it and left. Close aides of either family were tight-lipped about the incident. They only said it was a "private matter".

Yadav's decision to seek divorce was met with strong disapproval from his family, who stood by Aishwarya an urbane management graduate from Delhi whose late grandfather Daroga Prasad Rai was the chief minister of Bihar in the 1970s.

Repeated attempts by Lalu Prasad, who is in Ranchi serving sentences in fodder scam cases, to make his mercurial elder son withdraw the divorce petition bore no fruit. Tej Yadav had thrown a fit when the party, in an apparent bid to placate Chandrika Roy, fielded him as its Lok Sabha candidate from Saran, a stronghold of the RJD supremo.

After his humiliating defeat at the hands of sitting BJP MP Rajiv Pratap Rudy, Roy blamed it on "non-cooperation" from Lalu Prasad's family, RJD sources said. Roy recently made his displeasure public when he skipped a meeting of party legislators and has refused to get his membership of the organization renewed.