Terrorism is a low cost sustainable option which may damage enemies to a great extent, Doval said in a reference to Pakistan. 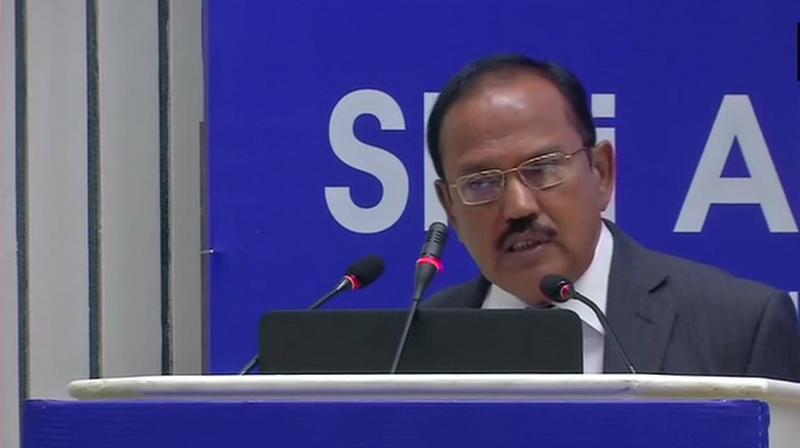 Doval, who was addressing a meeting of the chiefs of the Anti Terrorism Squads (ATS), said the biggest pressure on Pakistan comes from the functionaries of the FATF. (Photo: ANI | Twitter)

New Delhi: Pakistan is under a lot of pressure at the Financial Action Task Force (FATF) meeting, currently under way in Paris, to rein in terror groups operating from its soil, National Security Advisor Ajit Doval said on Monday.

Doval, who was addressing a meeting of the chiefs of the Anti Terrorism Squads (ATS), said the biggest pressure on Pakistan comes from the functionaries of the FATF. In the present context no country can afford to go for a war as the financial and human costs are huge and no one is sure about victory, he said.

"Pakistan has been using terrorism as the instrument of state policy," he said. Terrorism is a low cost sustainable option which may damage enemies to a great extent, Doval said in a reference to Pakistan. The FATF is an inter-governmental body established in 1989 to combat money laundering, terrorist financing and other related threats to the integrity of the international financial system.

The National Investigation Agency (NIA) Director-General YC Modi said, “Bangladeshi terror organisation Jamaat-ul-Mujahideen (JuM) is increasing their area of operations in India and has expanded into the country in Bihar, Maharashtra, Karnataka and Kerala under the guise of migrants from Bangladesh.”

"NIA has noticed that Jamaat-ul-Mujahideen Bangladesh (JMB) has increased its activities in Bihar, Maharashtra, Kerala and Karnataka among others in the name of Bangladeshis. The NIA has also identified 125 suspicious names of JNB workers and shared them with other agencies," Modi said.

Praising the work done by NIA, YC Modi said, "In a very short period the NIA has done excellent work on terror funding, Naxalism, North-East insurgency to registered cases and our success ratio is more than 90 per cent."

"I fell very proud that NIA and state police have very cordial relation due to which we were able to foil terrorist plans a number of times," Modi added.

The NIA DG, however, also raised concerns about the increased activity of some groups in states.

Inspector-General (IG) NIA, Alok Mittal added that many top separatist leaders and chiefs of outlawed organisations had been found guilty of facilitating terror funding, which was being sent from across the border, leading to their arrest.

"In the main case of terror funding in Jammu and Kashmir, chiefs of proscribed organizations and top separatist leaders have been arrested and charge-sheeted. None have got bail so far. They were being funded from Pakistan High Commission, through remittances and hawala transfers," Mittal said.

He added that efforts were being made from Pakistan to revive terrorism in Punjab and the people arrested in targeted killing cases have been found to be linked with the Khalistan Liberation Force (KLF).

"There have been continuous efforts from across the border to revive terror activities in Punjab. Out of 16 arrested for targeted killings in eight cases, the Khalistan Liberation Force was found to be involved. Funds from UK, Italy, France and Australia were sent for this," he said.

"We have registered fresh case based on anti-India activities of Sikhs for Justice, they are running a campaign on social media and trying to radicalize Sikh youth. 5 arrested in UP's Shamli last year admitted they were radicalized through 'Referendum 2020' propaganda," Mittal added.