The Supreme Court reserved its verdict on a bunch of petitions demanding a probe into the Rafale deal. 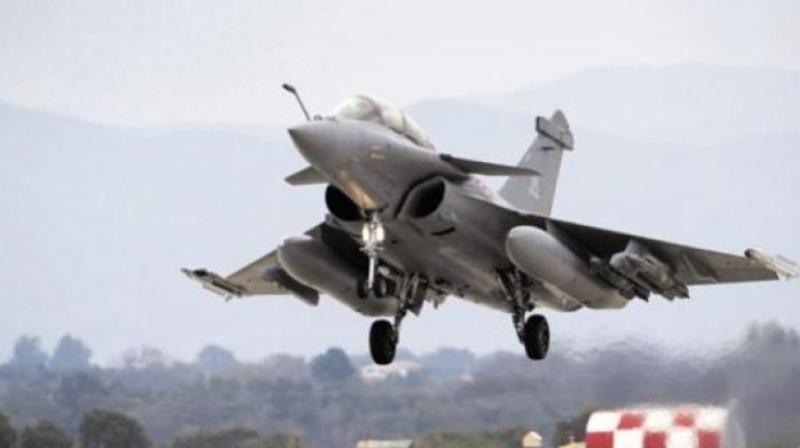 Centre told the Supreme Court that there is no sovereign guarantee from French government on delivery of 36 Rafale jets but there is a letter of comfort from the French prime minister. (Photo: File)

New Delhi: The Supreme Court on Wednesday reserved its verdict on a bunch of petitions demanding a probe into the Rafale deal.
A bench comprising Chief Justice Ranjan Gogoi and Justices S K Kaul and K M Joseph today concluded the arguments advanced by various parties which have sought court-monitored probe into procurement of 36 Rafale fighter jets from France.

The pleas also sought registration of FIR in connection with the alleged irregularities in the deal.

The hearing comes two days after the Centre submitted in a sealed cover handed over a 14-page document titled "Details of the steps in the decision making process leading to the award of 36 Rafale fighter aircraft order" to the petitioners in the case.

The government had also filed in the court in a sealed cover the pricing details of the Rafale jets.

Here are updates of SC’s examination of details of Rafale deal:

03:47 pm: “The Air Marshal and Vice-Marshals can go back. It is a different war game here in court. You can go to the actual war rooms,” Chief Justice of India Ranjan Gogoi after hearing senior Indian Air Force officials on issue of Rafale deal.

03:21 pm: The Supreme Court reserved verdict on a bunch of petitions demanding a probe into the Rafale deal.

02:56 pm: Centre told the Supreme Court that there is no sovereign guarantee from French government on delivery of 36 Rafale jets but there is a letter of comfort from the French prime minister.

02:43 pm: The Supreme Court has asked Additional Secretary Defence as to why the offset guidelines were changed in 2015. “What about country's interest? What if the offset partner doesn't do any production?” the apex court asked.

02:38 pm: Attorney General KK Venugopal appearing for the Centre said, “Dassault has not yet submitted details of offset partner to government.”

02:35 pm: The Supreme Court asked about the change in offset guidelines in 2015. Additional Secretary of the Defence Ministry explained the defence offset guideline to the court and said that the offset contract runs concurrently with the main contract.

02:30 pm: Deputy Chief of Air staff, Air Marshal V R Chaudhari and two other officers from Indian Air Force told Supreme Court that Sukhoi 30s was the latest to be inducted which is a 3.5 generation aircraft and added that they do not have 4th or 5th generation aircraft. The court then said that "it means there has been no induction of aircrafts since 1985".

"India needed 4 plus generation fighters that is why the Rafale jet was selected," they added.

01:04 pm: “Decision we need to take is whether or not to bring pricing facts in public domain,” Supreme Court on Rafale deal.

01:03 pm: “Any discussion on pricing of Rafale fighter jets can only take place if facts are allowed to come in public domain,” Supreme Court during Rafale hearing.

12:54 pm: Chief Justice of India Ranjan Gogoi said, “Any debate on pricing of the Rafale deal comes only if this Court decides those aspects needs to come in public domain.”

12:53 pm: Attorney General K K Venugopal who appeared for the Centre said, “Pricing details have been given in a sealed cover but there are factors like inter- governmental agreement which barred its disclosure.”

12:45 pm: Attorney General KK Venugopal appearing for the Centre told the Supreme Court that secrecy was not on the price of aircraft but on weaponry and avionics. “The price of Rafale with break up of weapons and avionics has been shared with the Court, but Court cannot sit in judicial review on it,” he said.

12:30 pm: CJI Ranjan Gogoi asks Attorney General KK Venugopal, "Is any officer from Indian Air Force present in court to answer the queries on the issue? After all we are dealing with the air force, we would have liked to ask from the officer of Air force on the issue."

12:24 pm: The Supreme Court refused to take on record some papers which Arun Shourie wanted to place before it.

11:54 am: “We are giving you full hearing. Use it carefully, cite only necessary things,” CJI Gogoi to advocate Bhushan during Rafale hearing.

11:53 am: “Government hiding behind secrecy clause, has not disclosed price of Rafale jets,” Advocate Bhushan told the Supreme Court during Rafale hearing.

11:52 am: Prashant Bhushan submitted, on pricing there can’t be any secrecy issue when government itself disclosed the price in Parliament. “It’s a bogus argument for government to say they can’t disclose pricing. In new deal, Rafale jets cost 40 per cent more than earlier deal.”

11:13 am: Senior Supreme Court lawyer, Prashant Bhushan, told the court that there was no sovereign guarantee from the side of the France government in the deal.

11:12 am: Prashant Bhushan, appearing for former Union minister Arun Shourie, who is also one of the petitioners in the Rafale deal case, submitted to the three-judge apex Court that only in three situations, the intergovernmental route can be resorted.

10:56 am: Counsel appearing for AAP leader Sanjay Singh tells the Supreme Court that pricing of the 36 Rafale jet deal was revealed in the Parliament twice, hence, the submission of government that pricing details cannot be made public was not acceptable.

10:53 am: Petitioner advocate ML Sharma tells the Supreme Court that report filed by the government reveals that there has been serious fraud while making the decision post May 2015.The petitioner urges the apex court that the matter be heard by a five-judge bench.