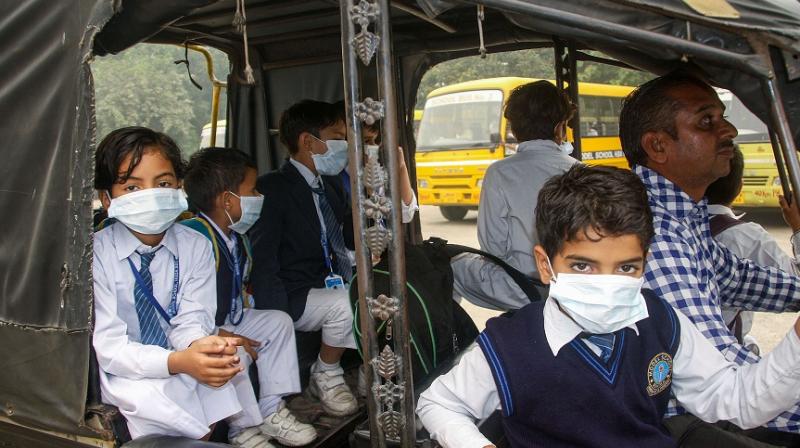 Pictures of school students with their faces covered with anti-pollution masks and handkerchiefs were shared widely on social media. (Photo: PTI)

New Delhi: The Supreme Court-mandated anti-pollution authority EPCA on Wednesday ordered closure of schools in Delhi-NCR for the next two days as pollution in the region hovered close to emergency levels.

"Keeping in mind the hazardous exposure to children, the CPCB Task Force has recommended, which the EPCA is directing, that all schools must remain shut for the next two days," the Environment Pollution (Prevention and Control) Authority said in a letter to the chief secretaries of Delhi, Uttar Pradesh, Haryana, Punjab and Rajasthan.

Following the order, the Delhi government announced the closure of schools in the national capital on Thursday and Friday.

"In view of deteriorating air quality because of pollution due to stubble burning in Uttar Pradesh, Delhi govt has decided to close schools tomorrow and day after," Deputy Chief Minister Manish Sisodia said in a tweet.

Separate orders were ALSO issued by the district administrations of the adjoining Uttar Pradesh districts following directions from the EPCA.

The ban on the hot-mix plants and stone-crushers in Delhi-NCR has been extended till the morning of November 15, it said.

On November 4, the apex court banned construction and demolition activities in the region till further orders.

All coal and other fuel-based industries, which have now shifted to natural gas or agro-residue, will remain shut in Faridabad, Gurugram, Ghaziabad, Noida, Bahadurgarh, Bhiwadi, Greater Noida, Sonepat, Panipat till November 15, the EPCA said.

In Delhi, industries which are yet to shift to piped natural gas will not operate during the period.

On November 1, the Delhi government ordered closure of all schools till November 5 after the EPCA declared a public health emergency in Delhi-NCR due to a harmful spike in pollution post Diwali.

Meanwhile, Delhi Chief Minister Arvind Kejriwal said in view of the situation, the odd-even road rationing scheme could be extended beyond November 15.

At a meeting of a CPCB-led task force to review the situation on Wednesday, an India Meteorological Department (IMD) official said, "Low surface winds, low mixing depth and contribution from fires due to northwesterly winds resulted in the severe plus category, which is likely to continue till Thursday.

"Strong winds are expected from November 15, which will bring down the air pollution levels to the very poor category."

Delhi-NCR gasped for breath on Wednesday as the noxious smog resulting from raging farm fires and an unfavourable weather pushed the pollution levels in the region towards the "emergency" zone. A large number of children were exposed to the harmful spike in pollution as schools remained opened on Wednesday.

Pictures of school students with their faces covered with anti-pollution masks and handkerchiefs were shared widely on social media.

"#DelhiAirPollution what's the use of being a developing country if our children are not permitted to breathe in clean air...Must think seriously about solutions as soon as possible before any emergency occurs. #DelhiAirEmergency," a Twitter user posted on the microblogging website.