Prime Minister Modi said the grouping of five countries had led to economic development despite the global economic slowdown. 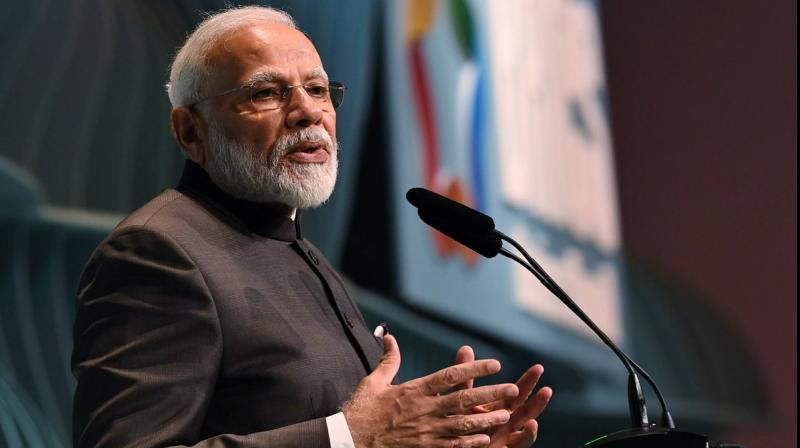 Noting that India has "limitless" possibilities and "countless" opportunities, the Prime Minister urged the BRICS business leaders to take advantage of them. (Photo: MEA | Twitter)

New Delhi/Brasalia: India is the world's most "open and investment friendly" economy, Prime Minister Narendra Modi said here on Thursday as he wooed the BRICS business leaders, urging them to invest in the country and take advantage of its "limitless" possibilities and "countless" opportunities.

Addressing the closing ceremony of the BRICS Business Forum, Prime Minister Modi said the grouping of five countries had led to economic development despite the global economic slowdown.

"India is the most open and investment friendly economy in the world due to political stability, predictable policy and business friendly reforms. By 2024, we want to make India a five trillion dollar economy. The infrastructure alone requires USD 1.5 trillion investment," he said.

Noting that India has "limitless" possibilities and "countless" opportunities, the Prime Minister urged the BRICS business leaders to take advantage of them. "I invite the business of BRICS countries to build and grow their presence in India," he said. "BRICS countries account for 50 per cent of the world's economic growth. Despite the recession in the world, BRICS countries accelerated economic growth, drove millions out of poverty and achieved new breakthroughs in technology and innovation. Now ten years after the founding of BRICS, this forum is a good platform to consider the direction of our efforts in the future," Modi said. The prime minister said simplifying intra-BRICS business will increase mutual trade and investment.

"Tax and customs procedures between us five countries are getting easier. The business environment is getting easier with the collaboration between intellectual property rights, and banks. I request the BRICS Business Forum to study the necessary business initiatives to take full advantage of the opportunities thus generated," he said. "I would also like to request that priority areas in business be identified among us for the next ten years and based on them blue print of Intra-BRICS collaboration should be made," Modi said.

"If one BRICS country has technology, the other is related to raw materials or markets. Such possibilities are especially in electric vehicles, digital technology, fertilizer, agricultural products, food processing. I would urge the forum to map such complementarities in five countries. I would also like to suggest that at least five such areas should be identified by the next BRICS Summit in which joint ventures can be formed between us on the basis of complementarities," he said.

"Important initiatives like innovation BRICS Network, and BRICS Institution for Future Network will be considered during tomorrow's summit. I request the private sector to join these efforts focused on human resources. Connecting young entrepreneurs with these initiatives will also give more strength to business and innovation," Modi said.

The PM said there was a possibility of making travel, business and employment between the BRICS (Brazil, Russia, India, China and South Africa) countries more easy. He thanked President of Brazil Jair Bolsonaro for his government's decision to give Indians visa-free entry in his country. "I thank the President of Brazil for deciding the visa free entry to Indians. We five countries should also consider mutual social security agreement," Modi said. Prime Minister Modi is in Brazil for the 11th BRICS Summit which will focus on building mechanisms for counter-terrorism cooperation and strengthen India's ties with the world's five major economies.