The Supreme Court has also said that if elected in the bypolls, the disqualified MLAs can become ministers or hold public office. 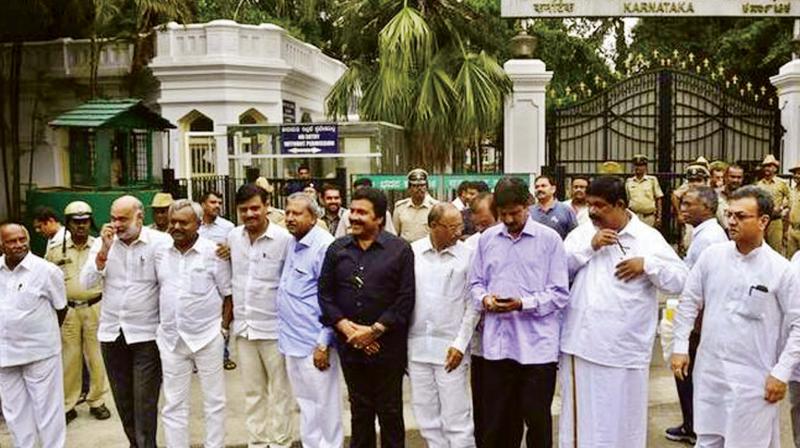 New Delhi: In a mixed verdict, the Supreme Court on Wednesday upheld the disqualification of 17 Karnataka MLAs belonging to the Congress and Janata Dal (Secular), but set aside then Speaker K.R. Ramesh Kumar’s order unseating them for the remainder of the current Assembly’s term, paving the way for them to contest the coming byelection to 17 seats.

After the court’s verdict, all eyes were on the BJP’s next move, on whether it would give tickets to the Congress-JD(S) rebels. Karnataka deputy chief minister C.N. Ashwathnarayan said the disqualified MLAs would join the BJP on Thursday in Bengaluru. The Supreme Court has also said that if elected in the bypolls, the disqualified MLAs can become ministers or hold public office.

Upholding the disqualification orders passed by then Speaker Ramesh Kumar on July 25 and July 28, 2019, a three-judge bench comprising Justices N.V. Ramana, Sanjeev Khanna and Krishna Murari set aside the part of the Speaker’s order unseating the 17 for the rest of the Assembly’s term. Calling for the strengthening of the anti-defection law to ensure that “undemocratic practices are discouraged and checked”, Justice Ramana said there was a “growing trend” of Speakers “acting against the constitutional duty of being neutral”.

The court also lamented that “horse-trading and corrupt practices” associated with defections and change of loyalties for the “lure of office or wrong reasons have not abated”.  As a principle, the court SC upholds disqualification of MLAs, lets them fight bypolls said it was the prerogative of a member to resign and he could not be compelled to continue in the legislature. “Once it is demonstrated a member is willing to resign out of his free will, the Speaker has no option but to accept the resignation” — a point emphasised by the 17 MLAs in the course of the hearing.

However, the verdict said that “a member disqualified under the Tenth Schedule shall be subjected to sanctions provided under Articles 75(1B), 164(1B) and 361B of the Constitution, which provides for a bar from being appointed as a minister or from holding any remunerative political post from the date of disqualification till the date on which the term of his office would expire or if he is re-elected to the legislature, whichever is earlier”.

Rejecting the plea by the Congress and JD(S) that the entire issue be sent to a larger five-judge Constitution Bench, Justice Ramana said: “The existence of a substantial question of law does not weigh on the stakes involved in the case, rather it depends on the impact the ‘question of law’ will have on the final determination.”

Making it clear there was no “substantial question of law” in this matter which needs reference to a larger bench as sought by the Congress and JD(S), the court said: “If the questions having a determining effect on   the final   outcome have already been decided by a conclusive authority, then such questions cannot be called as ‘substantial questions’ of law.”