India   All India  14 Dec 2016  'Frustrated' Rahul bluffing on having info on PM: Centre
India, All India

'Frustrated' Rahul bluffing on having info on PM: Centre

'The Congress Party and Rahul Gandhi have been exposed in front of the world,' Ananth Kumar said. 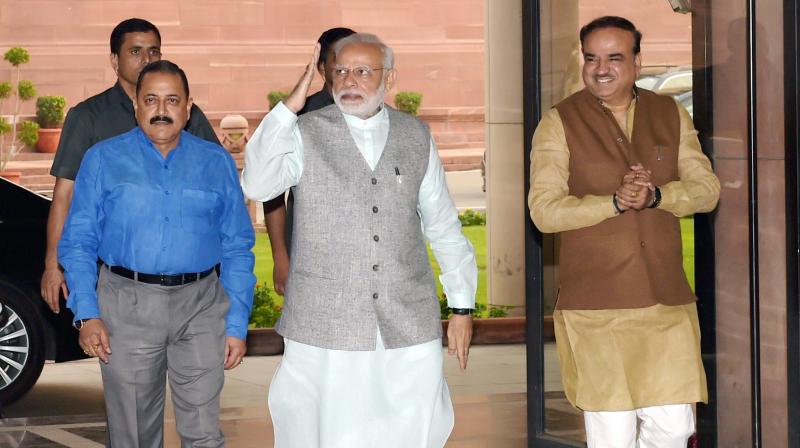 New Delhi: In response to Rahul Gandhi's sharp remarks on Prime Minister Narendra Modi, Parliamentary Affairs Minister Ananth Kumar on Wednesday said that the Congress Vice-President is rambling out of "frustration" and "disappointment" as the grand old party was done.

"The Congress Party and Rahul Gandhi have been exposed in front of the world. Due to frustration and disappointment, he is speaking anything.

"Yesterday, a channel conducted a sting operation which showed how Congress, Bahujan Samaaj Party and Samajwadi Party are trying to change the concept of demonetisation from currency change to "note jugaad," said Ananth Kumar."

Denying the allegation put by Rahul Gandhi of having personal corruption-related information of the Prime Minister, the Parliamentary Affairs Minister said, "Had he got some information, he would have revealed it 20 days before."

Terming the charges leveled against Prime Minister Modi by Rahul Gandhi baseless, Ananth Kumar said that it is under desperation that he is making such baseless charges.

Kumar emphasised that since the beginning of parliament session on November 16, the Centre has been asking the opposition to have a discussion on demonetisation.

Rahul Gandhi earlier today said that Prime Minister Narendra Modi is terrified of him as he would reveal all of his wrong doings.

"I have already said before the Prime Minister is personally terrified of me being allowed to open my mouth inside the Lok Sabha, because I have information on the PM that is going to explode his balloon," he said.