Sachin Pilot has been named the deputy chief minister of Rajasthan. 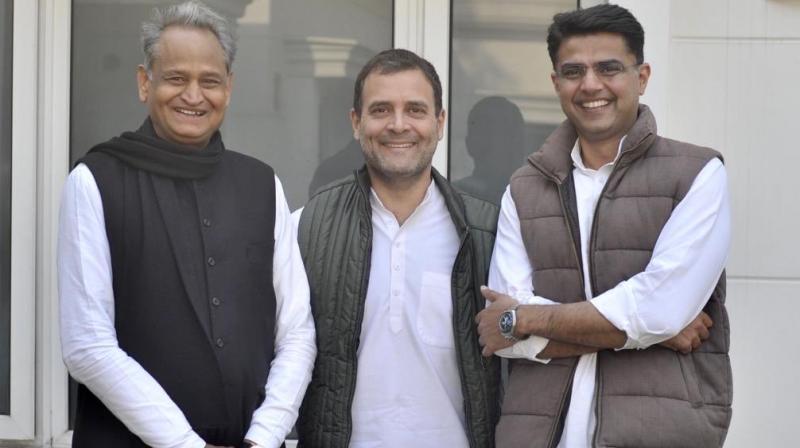 New Delhi: Veteran politician and senior Congress leader Ashok Gehlot has been named as the Chief Minister of Rajasthan.

Sachin Pilot, who was also eyeing for the Chief Ministerial post in the state, has been named the deputy chief minister of Rajasthan.

Pilot will also continue with his post as Rajasthan Congress Chief.

The announcement came minutes after Gehlot and Sachin pilot met the Congress President for the consecutive day on Friday.

Rahul Gandhi tweeted a photo with Ashok Gehlot and his rival for the top job, Sachin Pilot and mentioned “United colours of Rajasthan!”

The united colours of Rajasthan! pic.twitter.com/D1mjKaaBsa

It was quite similar to what Rahul Gandhi tweeted on Thursday evening before the formal announcement of the Madhya Pradesh Chief Minister.

Kamal Nath and Jyotiraditya Scindia flanked the Congress president in the post tweeted with Leo Tolstoy's quote: "The two most powerful warriors are patience and time."

The two most powerful warriors are patience and time.

Hours later, Kamal Nath was named as the Chief Minister of Madhya Pradesh.

There have been hectic discussions between top party leaders, including Sonia Gandhi and Priyanka Gandhi Vadra, on the selection of chief ministers for Rajasthan and Madhya Pradesh.

Ashok Gehlot, a Gandhi loyalist with close ties to the family for three generations, first came into prominence when he became one of the youngest members of Parliament (MP) from Jodhpur in the 1980 general elections.

Gehlot rose from the ranks, from being a member of the National Students Union of India (NSUI) to a district president and then chosen by former Prime Minister Indira Gandhi to become a member in her council of ministers.

Hailing from a family of magicians, Gehlot was first spotted by Sanjay Gandhi. During his tenure as a minister in Indira Gandhi’s government, Gehlot handled tourism, civil aviation and sports.

At 34-years-old, he went on to becoming the youngest chief of the Congress in Rajasthan under the leadership of former Prime Minister Rajiv Gandhi in 1985.

Gehlot again became a Union minister in 1991 when P V Narsimha Rao was the prime minister. This was his last stint in national politics, and he soon announced he would focus only on Rajasthan.

Gehlot once again became Congress state president in 1994 and became the chief minister for the first time in 1998. His second term as chief minister started in 2008 when defeated the Vasundhara Raje government.