SAD MLAs raised slogans against the Congress government and later staged a walkout. 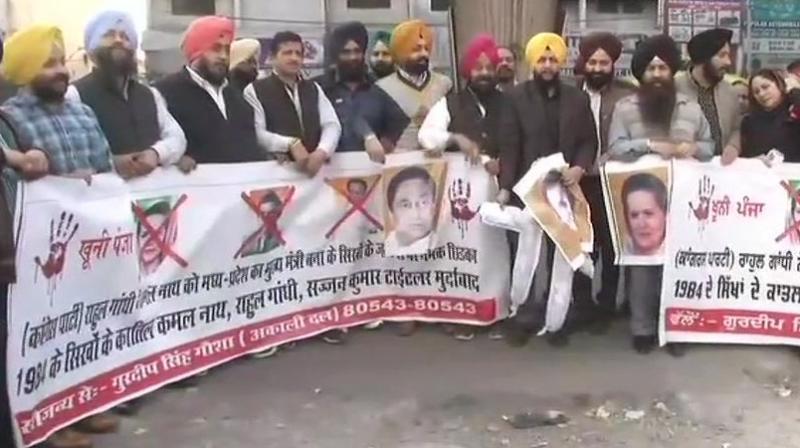 Chandigarh: The opposition Shiromani Akali Dal (SAD) on Friday protested in the Punjab Assembly the Congress' decision to appoint Kamal Nath as Madhya Pradesh chief minister, saying the Rahul Gandhi-led party was rubbing salt into the wounds of victims of the 1984 anti-Sikh riots.

SAD MLA Bikram Singh Majithia raised the issue in the state Assembly a day after his party colleague Manjinder Singh Sirsa alleged in Delhi that Kamal Nath had a hand in the anti-Sikh riots that broke out in the national capital following the assassination of the then prime minister Indira Gandhi in 1984.

Majithia said the Congress was rubbing salt into the wounds of victims of the riots by naming Kamal Nath as Madhya Pradesh chief minister.

Parliamentary Affairs Minister Brahm Mohindra claimed that Kamal Nath had no role in the 1984 riots.

He also showed a picture in his mobile phone purportedly of former chief minister Parkash Singh Badal felicitating Kamal Nath at an event in the past.

Intervening during a call attention motion on the concluding day of the winter session, Amarinder Singh said the law was taking its due course as far as allegations against Kamal Nath were concerned.

He said Kamal Nath served as a Union minister for more than 10 years after the allegations first surfaced against him.

The chief minister said a mere reference in the Nanavati Commission report could not be construed as Kamal Nath's involvement in the case.

Members of the Congress and the SAD engaged in a verbal duel on the issue. SAD MLAs raised slogans against the Congress government and later staged a walkout.

On Sukhbir Singh Badal's allegation that cases pertaining to the 1984 riots were "suppressed" over the years, Mohindra said: "The country has seen five non-Congress prime ministers, they were your (SAD) allies... If you felt so, why did you not raise it then."

Sukhbir Badal gave credit the Narendra Modi-led NDA government with giving justice to the victims of the riots.