Hectic activities in BJP after major blow in Assembly polls

The meeting was also attended by state unit chiefs and organisational secretaries of the states teams and continued till late evening. 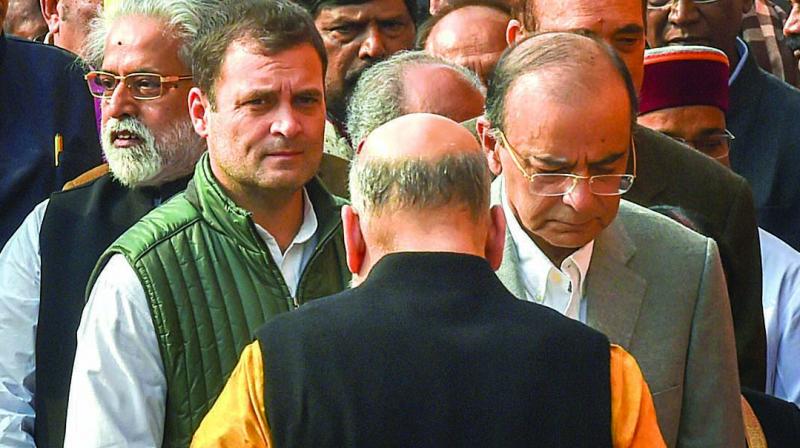 Congress president Rahul Gandhi, BJP president Amit Shah and other dignitaries at a ceremony to pay tribute to the martyrs of 2001 Parliament attack on its 17th anniversary at Parliament in New Delhi. (Photo: PTI)

New Delhi: With the just-concluded Assembly polls results of five states giving a major jolt to the BJP, the saffron party will hold national conventions of its seven morchas in different states to garner support and volunteers for the 2019 electoral battle. Also, the two-day meet of BJP’s national council will be held from January 11 in the national capital, first major meeting of the party’s central and state leadership after the recent polls rout.

The decision to hold national conventions of party’s morchas was taken during a meeting of office-bearers and was headed by party president Amit Shah. The meeting was also attended by state unit chiefs and organisational secretaries of the states teams and continued till late evening.

When asked whether the party leaders discussed about the recent poll rout in Madhya Pradesh, Chattisgarh and Rajasthan, national general secretary Bhupendra Yadav said that the meeting was scheduled earlier and was to discuss only organisational matters.

While Prime Minister Narendra Modi will address the national conventions of the mahila morcha and the kisan morcha, Mr Shah and other senior leaders, including Union ministers Rajnath Singh, Nitin Gadkari, Thawarchand Gehlot among others will address the meets.

Amid concern within the BJP and the Modi government over feedback that there is growing unrest among the farming community over the poll promises, the BJP leadership decided that the kisan morcha should be addressed by the Mr Modi who would try to assure and convince the farmers that the government has been working diligently from day one for their betterment. One of the key reasons for party’s poll rout in MP, Chattisgarh and Rajasthan is said to be farmers unrest. The kisan morcha’s two-day meet will take place from February 21 in Uttar Pradesh. The venue is yet to be decided.

Mr Modi has a major support base among the women voters and he will address the mahila morcha’s national convention will be held in Ahmedabad on December 21-22.

The party’s youth morcha’s national convention will take place on December 15-16 in the national capital.

Odisha capital Bhubaneshwar will be the venue for the party’s ST morcha’s convention and will be addressed by Mr Rajnath Singh.

The BJP leadership will hold the national convention of its OBC morcha in Patna’s Gandhi Maidan on February 15-16.