India   All India  14 Dec 2018  Not a setback as issue still live in 'people’s court': Cong on SC verdict on Rafale
India, All India

Not a setback as issue still live in 'people’s court': Cong on SC verdict on Rafale

The Congress said the party would keep up its demand for a Joint Parliamentary Committee (JPC) to investigate the Rafale deal. 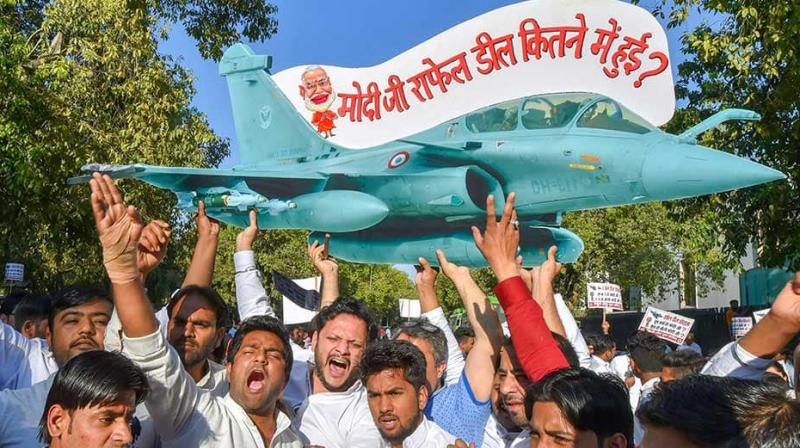 New Delhi: The government demanded Rahul Gandhi’s apology as the Supreme Court on Friday gave a clean chit to the Modi government on the Rafale deal.

Congress leader Anand Sharma said, “Supreme Court has not commented on many important aspects of the deal. We will continue to demand a Joint Parliamentary Committee on the Rafale deal. The JPC has the right to summon all documents.”

“There is no reason for PM Modi and BJP government to celebrate Supreme Court order which in itself is contradictory. Supreme Court has said it won’t be proper for it to go into details,” added Sharma.

Senior party leader Jyotiraditya Scindia said that the clean chit to Modi government is not a setback as the issue is still live in the “people’s court” and Congress will continue to raise it in the Parliament.

Congress spokesperson, Randeep Surjewala said, “The verdict of the Supreme Court today is a validation of what the Congress party stated months again, that Supreme Court is not the forum to decide such sensitive defence contract.”

Surjewala added, “Article 136 and 32 is not the forum to decide the issue, the pricing, the process, the sovereign guarantee and the corruption in the Rafale contract. Only forum and only media is a Joint Parliamentary Committee (JPC) which can probe the entire corruption in the deal. We challenge PM Modi for JPC probe into Rafale deal to unveil every layer of corruption”

"It is a totally incorrect judgement," stated petitioner Prashant Bhushan moments after the court dismissed batch of petitions that demanded a probe into the controversial Rafale fighter jets deal stating that it was satisfied that the process for procurement had been followed.

"We have just asked for an investigation constitute a Special Investigation Team under the supervision of the Supreme Court to investigate the reasons for cancellation of earlier deal for the purchase of 126 Rafale fighter jets. This decision is wrong in my opinion. The court has given this order citing scope of limited judicial review," Bhushan told reporters after the verdict.

The activist lawyer also added that he is yet to take a call on filing the review petition on the latest Supreme Court's verdict.

Congress has been demanding a joint parliamentary committee probe into the Rafale fighter jet deal.

The bench, headed by Chief Justice Ranjan Gogoi, stated that there is no need to conduct an investigation into details of Rafale pricing.