Rajnath Singh demanded in Lok Sabha that Rahul should apologise on floor of the House for 'misleading' the country on Rafale issue. 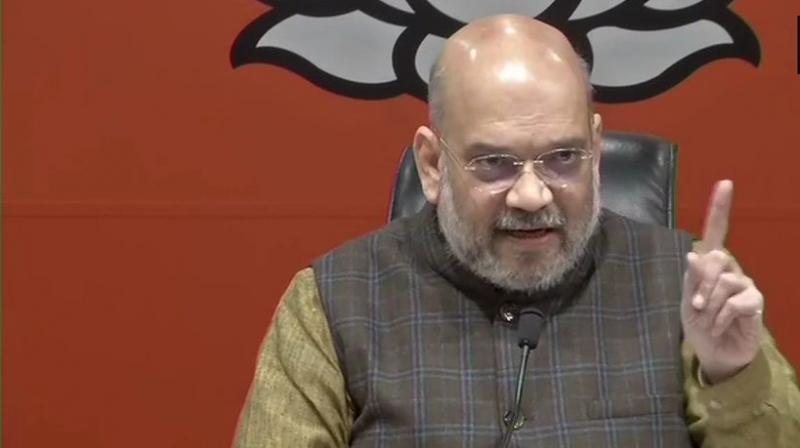 Shah said, 'We welcome the judgement of the Supreme Court, the truth has won. People were being misled by unfortunately the country's oldest party. It’s a slap on politics of lies.' (Photo: ANI | Twitter)

New Delhi: As the Supreme Court on Friday dismissed petitions seeking probe into Rafale deal, BJP chief Amit Shah welcomed the decision and said it “exposed” the campaign of misinformation against the government headed by Congress president Rahul Gandhi and asserted that the “truth always triumph”.

Shah said, “We welcome the judgement of the Supreme Court, the truth has won. People were being misled by unfortunately the country's oldest party. It’s a slap on politics of lies.”

“Rahul Gandhi should apologize to the nation for misleading people. Want to ask Rahul ji what was the source of information on basis of which he made such big allegations?,” questioned Shah.

Challenging Congress and its allegations, Shah said, “If Congress had all the proof then why did they not go to the Supreme Court with it? Their B team was already there. JPC is formed only when there is a discussion in the House (Parliament), I challenge Congress for a discussion on it Rafale deal.”

Home Minister Rajnath Singh demanded in the Lok Sabha that Rahul Gandhi should apologise on the floor of the House for “misleading” the country on the Rafale issue.

Maharashtra Chief Minister, Devendra Fadnavis said, “Supreme Court judgement's on Rafale deal has exposed the lies of Congress and its President Rahul Gandhi. This judgement has vindicated our stand. Rahul Gandhi should apologize for defaming our country globally.”

Law Minister Ravi Shankar Prasad welcomed the judgement and urged that all campaigns against the Rafale deal must end now as the country's strategic interest is more important.

"I am very happy that today the Supreme Court has given the decision, upholding the entire Rafale deal. ...I would only urge one thing, that all campaigns against Rafale must end now because the country's strategic interest is more important," Prasad added.

The Supreme Court Friday gave the Narendra Modi government a clean chit on the procurement of 36 Rafale fighter jets from France and dismissed all petitions seeking a direction to the CBI to register an FIR for alleged irregularities in the deal.

The BJP has demanded an apology from the Congress and its president Rahul Gandhi for levying false allegations against Prime Minister Narendra Modi.