Shah was addressing election rallies at Giridih and Baghmara Assembly seats in J'Khand. 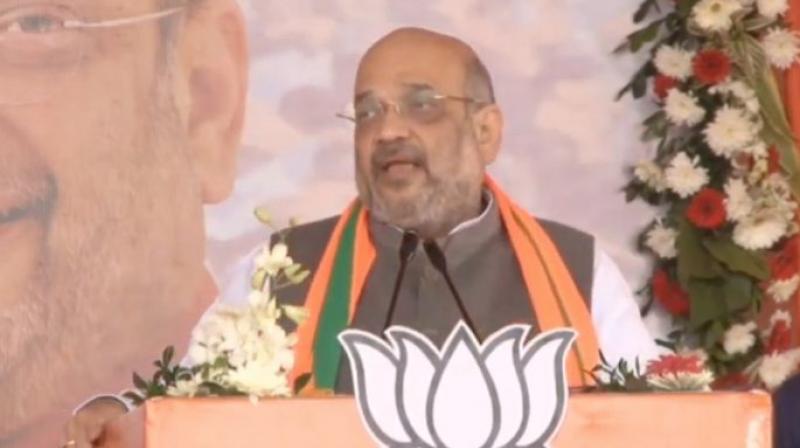 'Rahul Gandhi and Hemant Soren say why is Kashmir issue important in Jharkhand elections?... The youth of this state are securing the borders of this country. But, Rahul Gandhi does not know history as he has Italian sunglasses in front of his eyes,' Amit Shah said. (Photo: twitter | @BJP4India)

Giridih/Baghmara: Union Home Minister Amit Shah on Saturday hit out at the Congress, accusing it of stoking violence over the amended Citizenship Act.

Shah, addressing election rallies at Giridih and Baghmara Assembly seats, said the passage of the Citizenship (Amendment) Bill has caused a 'stomach ache' to the opposition party.

"We have brought the amended Citizenship Act and the Congress got a stomach ache and is fanning violence against it," he said.

The BJP president assured the people of the Northeast that their culture, language, social identity and political rights will be not be affected by the Act.

"I assure the people of Assam and other northeastern states that your culture, social identity, language and political rights will not be touched and the Narendra Modi government will protect them," he said.

Shah said Meghalaya Chief Minister Conrad Sangma and his cabinet ministers met him on Friday to discuss the issue.

"They said there is a problem in Meghalaya. I tried to make them understand that there is no issue. Yet, they asked me to change something (of the Act). I asked Sangma ji to come to me when he is free after Christmas and we can think constructively for a solution for Meghalaya. Nobody has anything to fear," he said.

Hitting out at Rahul Gandhi, Shah said the former Congress president is making 'noises' and is ignorant of India's history as he has 'Italian sunglasses' in front of his eyes.

''Even a district youth president of our party can give an account of the developmental work done during five years of BJP-led rule in Jharkhand than what Rahul Gandhi's Congress has done during 55 years of its rule,'' he said.

"Rahul Gandhi and Hemant Soren say why is Kashmir issue important in Jharkhand elections?... The youth of this state are securing the borders of this country. But, Rahul Gandhi does not know history as he has Italian sunglasses in front of his eyes," he said.

Shah also accused the Congress of 'encouraging' Naxalism, 'handing over' Kashmir to terrorists and dragging Ayodhya issue for years.

The BJP president said while the Congress accuses the saffron party of being anti-Muslim, it is the NDA government that had brought the Triple Talaq Act.

He said people of Jharkhand got electricity, LPG cylinders and houses during the BJP-led government in the state. Giridih and Baghmara are going to polls in the fourth phase on December 16.