India   All India  14 Dec 2019  Parts of Assam still reel under protests over CAB
India, All India

Parts of Assam still reel under protests over CAB 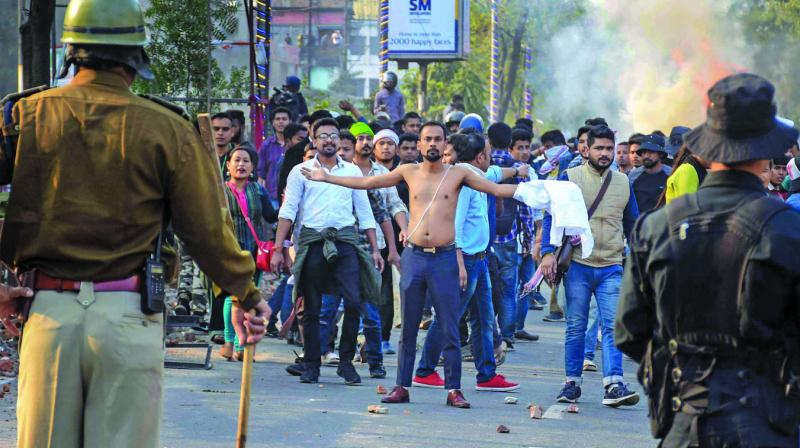 Protesters clash with the police during their march against the Citizenship (Amendment) Bill in Guwahati. (Photo: PTI)

Guwahati: The situation in trouble-torn Assam has started limping back to normalcy with protesting groups led by the All Assam Students Union (AASU) Friday deciding to confine their agitation to the daytime in addition to dissociating themselves from those indulging in violence in the name of protests.

With the new additional director general of police G.P. Singh taking over the law and order situation and new officers taking over the trouble-torn districts after a major reshuffle in the state police force, the Assam Police has also intensified its patrolling and is making their presence felt on the ground in capital city areas.

The defence spokesperson said that a total of eight columns of the Assam Rifles have been requisitioned by the administration, and all Army and Assam Rifles’ columns have managed to restore normalcy in their respective areas of deployment.

Meanwhile, hundreds of people cutting across age groups Friday once again peacefully defied curfew and joined the hunger strike called by AASU at Chandmari field to oppose the new citizenship act. A large number of people, including artists, singers and film stars, observed the 10-hour fast.

The AASU announced that it will file a PIL in the Supreme Court challenging the law. “There is no way Assam or the Assa-mese people will accept it. Besides peaceful protests, we will continue the legal battle against the law,” said AASU chief adviser Sammujjal Bhattacharya.

Besides AASU, several other organisations in Assam including Assam Public Works - which originally petitioned in the Supreme Court for updating the National Register of Citizens in Assam — have decided to file separate PILs in the top court.

The AASU also announced that they are suspending all kinds of protests after sunset for a week. “We are going to hold a Satyagraha movement at the sub-division level all over the state from December 16 to 18. Our slogan will be — either scrap CAB or arrest us,” said the AASU leadership, which reiterated their commitment to peaceful democratic agitation.

In a related development, former AGP minister turned BJP leader and chairman of Assam Petrochemical Ltd. Jagdish Bhuyan, who was accorded cabinet rank by the government, resigned from the party and all posts in protest of the citizenship act.

Meanwhile, the indefinite curfew which had been imposed since Wednesday evening, was relaxed for six hours starting 7am Friday in Guwahati and Dibrugarh. As soon as the curfew was relaxed, people gathered outside grocery shops and at vegetable markets in Guwahati to buy essentials. There was also a rush to withdraw money from ATMs, buy medicines and procure fuel.

However, mobile Internet and broadband services continue to remain affected. The suspension of mobile Internet services was extended for another 48 hours Thursday. The 10 districts where mobile internet has been suspended include: Lakhimpur, Tinsukia, Dhemaji, Dibrugarh, Charaideo, Sivasagar, Jorhat, Golaghat, Kamrup (metro) and Kamrup.

Mobile internet and messaging services were also suspended in neighbouring Meghalaya for 48 hours beginning 5pm Thursday after incidents were reported of vehicles being vandalised. Areas under two police stations in the state capital Shillong were placed under curfew. The curfews were relaxed during the day but will continue during the night.

The death toll in the Thursday night police firing rose to three Friday, with one more among those critically wounded succumbing to bullet injuries.

The state has been witnessing protests since the central government brought the Citizenship (Amendment) Bill (CAB) to fast-track citizenship to persecuted minorities coming to India from three neighbouring countries i.e. Pakistan, Bangladesh and Afghanistan.

The ongoing anti-CAB movement continues to rock the neighbouring states too as the Naga Students Federation has called for a six-hour total Nagaland bandh from 6am to 12noon Saturday to express the resentment of the Naga people towards the passing of the contentious Citizenship Amendment Bill (CAB) in Parliament.