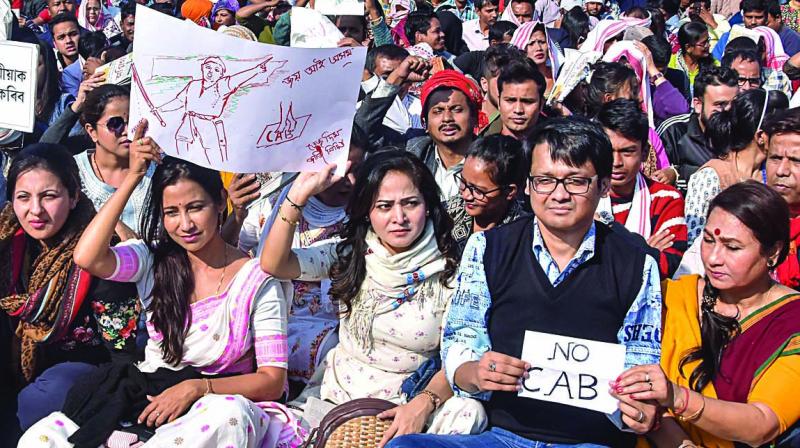 Assamese film actors take part in a hungerstrike organised by the All-Assam Students Union in protest against the Citizenship (Amendment) Bill in Guwhati on Friday. (Photo: PTI)

New Delhi: In a major casualty of the violent protests rocking Assam and some other parts of the Northeast due to the Citizenship (Amendment) Bill controversy, India on Friday announced the cancellation of its annual summit with Japan that was to have been held in Guwahati from December 15 to 17. With this, Japanese Prime Minister Shinzo Abe’s visit to India for the summit was also cancelled. “With reference to the proposed visit of Japanese PM Shinzo Abe to India, both sides have decided to defer the visit to a mutually convenient date in the near future,” the external affairs ministry announced in a terse statement. The proposed venue was never officially announced but all preparations had been made to hold the summit in Guwahati. The MEA had, however, officially announced the dates recently for the summit.

The new dates and venue are expected to be decided by the two sides in the coming weeks. Whether the summit ultimately takes place in Guwahati is held elsewhere will depend on the situation in Assam. The cancellation is, however, a blow to the Indian government’s efforts to showcase the Northeast as a region that can hold such high-profile meetings. Japan has been interested in investing in the region and the earlier proposed holding of the summit in Guwahati was to have been a powerful signal to this end.

The cancellation comes even as the Centre had discussed two other options of either going ahead with the summit in Guwahati or holding it somewhere else, such as New Delhi. But finally, the third option of deferring the event was decided upon.

The two countries recently held their 2+2 Dialogue at the foreign and defence ministers’ level in New Delhi, which had prepared the ground for Prime Minister Abe’s visit.

Our Guwahati correspondent adds: On the ground in Assam, while the overall situation has started limping back to normal with the protesting groups, led by the All Assam Students Union, deciding to confine their agitation to daytime and dissociating from those indulging in violence, there were reports of violent protests in Upper Assam’s Dibrugarh and Tinsukia districts. In Dibrugarh protestors set a Scorpio on fire while in Khwang, near Moran in Tinsukia district, protesters pelted stones on Army vehicles.With new additional DGP G.P. Singh taking over, and new officers taking over trouble-torn districts after a major state police shakeup, the Assam police also intensified patrolling in Guwahati and elsewhere.

A defence spokesman said a total of eight columns of the Assam Rifles have been requisitioned and all Army and Assam Rifles columns have managed to restore normality in their areas of deployment.