Cong posted a video on twitter where Modi is seen hugging world leaders such as the US and French Presidents, among others. 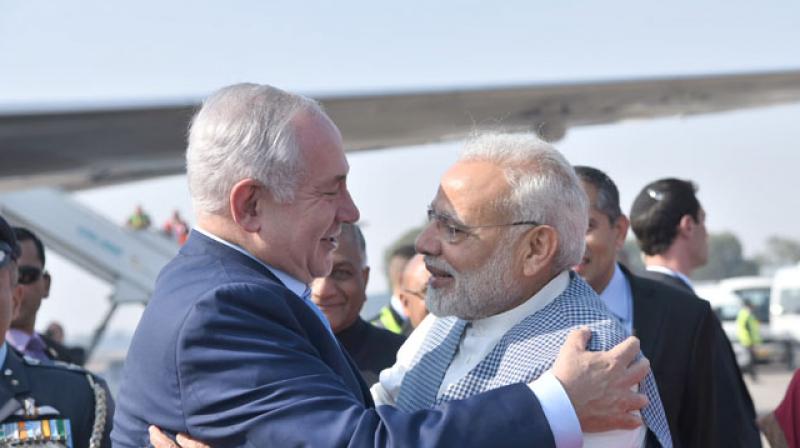 The Congress tweet came hours after Modi received Netanyahu at the airport, setting aside protocol, and hugged him as he deplaned the aircraft. (Photo: pmindia.gov.in)

New Delhi: The Congress on Sunday posted a tweet mocking Prime Minister Narendra Modi for hugging world leaders, evoking a sharp reaction from the BJP that slammed it as "immature" and demanded an apology.

In a video posted on the official Twitter handle of the Congress, Modi is seen hugging world leaders such as US President Donald Trump and French President Emmanuel Macron, among others.

"With Israeli PM Benjamin Netanyahu visiting India, we look forward to more hugs from PM Modi! #Hugplomacy," the Congress said in a tweet.

The tweet came hours after Modi received Netanyahu at the airport, setting aside protocol, and hugged him as he deplaned the aircraft.

"What they have tweeted shows their immaturity and lack of political sensibility. We condemn this. I hope wisdom prevails on them some day," Javadekar told reporters.

He said that the Congress lacks concrete issues and since it cannot defeat the prime minister electorally, it has posted such a tweet.

"This not only insults our prime minister but also the guest (Netanyahu). The Congress should not only withdraw the tweet but also issue an apology for it," he said.

BJP spokesperson Sambit Patra said the Congress has been consistently abusing the prime minister and the tweet is appalling and unpalatable.