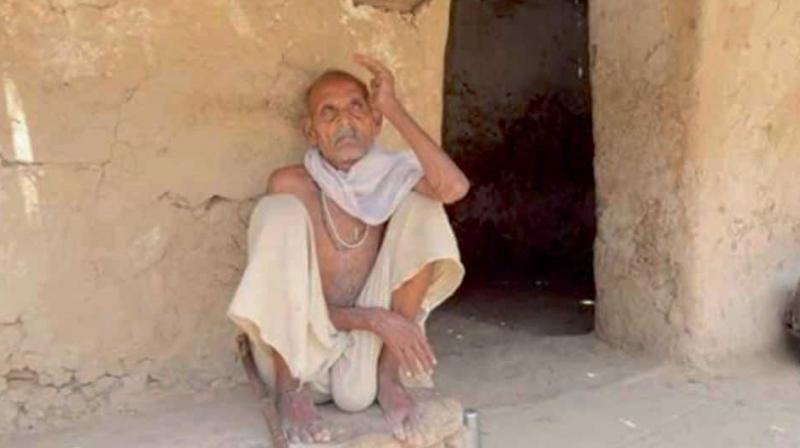 An old man left behind in his home in a village in Tikamgarh district by his fleeing family.

Bhopal: A severe drought has hit the  Bundelkhand region of Madhya Pradesh causing near calamitous situation, particularly in its rural belt.

The dry spell, that has left in its wake shrunken harvests, drinking water crisis and diminishing jobs and starvation-like situation in interior areas, has forced people leave  villages in droves.

“People are fleeing from their villages, leaving behind old and infirm at home. A humanitarian crisis of sorts is developing in Bundelkhand due to massive disruption of agriculture due to drought,” social activist Pavan Ghuwar, who has drawn the attention of National Human Rights Commission (NHRC) to the worsening situation in the region, told this newspaper.

Mr Ghuwar has claimed to have submitted 64 video clips depicting miseries of the drought-affected people, besides giving an account of tragic deaths and deprivations caused by the weak monsoon in the region, to the NHRC.

Chappan village in Tikamgarh district in Bundelkhand region is a perfect example of how the drought has brought miseries to the people. A threat of human tragedy literally looms large over the tribal hamlet. “A starvation-like situation has developed here.  The villagers are literally living on a diet of cooked leaves,” Mr Ghuwara who has visited the remote village in the first week of January this year, said. According to him, ‘Puanr’ roti, made of wheat and a particular species of foliage, has become the staple diet of the villagers.

Poverty-stricken villagers mix the leaves with wheat flour to make ‘Puanr’ roti to save them from hunger pangs because they cannot afford to buy adequate wheat needed to feed their families.

Around 50 families live in the village without electricity.

The most precious possessions of the families have been a few rickety utensils and bundles of old clothes for daily use. A garbage dump is lit at a vantage point to light up the village every evening.

Tikamgarh district collector Abhijit Agrawal has recently ordered an investigation into reported denial of below poverty line (BPL) cards to the families in the village.

Tragedy struck the Kushwaha family in Bargala Khirala under Puthvipur police station in the district when a young Mitu Kushwaha (26) hanged himself from a neem tree in last week of December last year due to crop failure caused by the dry spell. 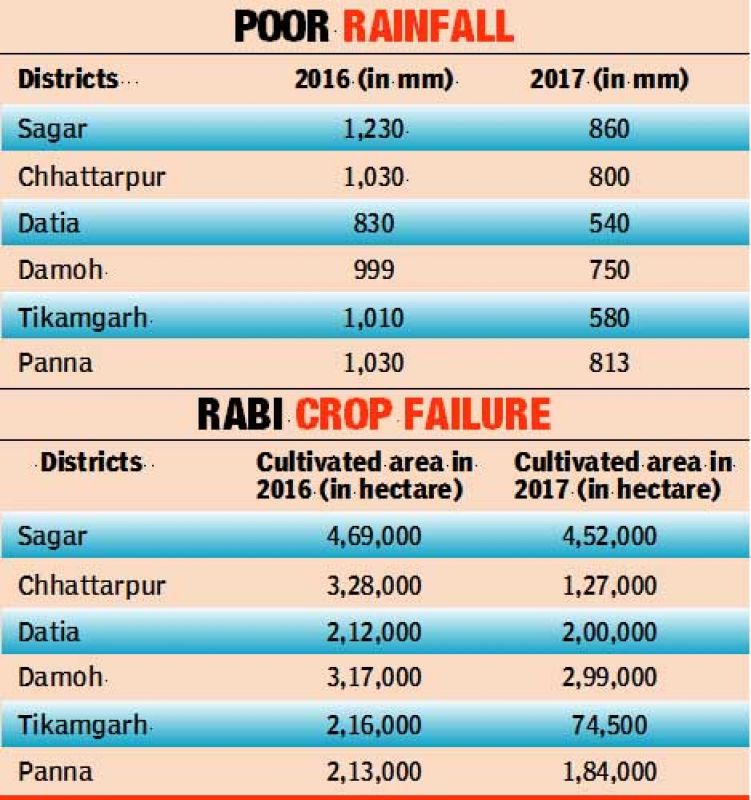 “My son had been trying to arrange money to go to Delhi in search of job to feed the family. He was upset at not being able to generate adequate money for his journey. We found his body hanging from a neem tree in the early hours of the fateful day,” the deceased’s father Dhaniram Kushwaha said.

The family has two acres of agriculture land. They suffered crop loss in the Kharif season and lacked financial resources to go for Rabi crop. Police has registered a case of unnatural death. Shankarlal Sahu (65), resident of Chimadhana village under Debari police station in Sagar district in Bundelkhand region has found suicide to be an easy way out to end his ordeals. He untied a cow and used the rope to hang himself from a tree in his agriculture land in the early hours of December 10 last year due to crop failure in his 5.5 acre. He ended his life as he couldn’t repay the Rs 3 lakh he had borrowed to treat his sick son and the Rabi crop, after suffering a loss of Kharif crops.

A case under Section 174 of CrPC has been registered in this connection by Debari police.

Cases of suicide by the farmers due to crop loss and failure to repay farm loans have been reported from different parts of Bundelkhand region, comprising Tikamgarh, Chhattarpur, Damoh, Sagar, Datia, and Datia districts, in the past one year.

Bundelkhand has accounted for 46 of the 599 suicide deaths of farmers and agriculture labourers witnessed in the first seven months of 2017 in MP, a report placed by the state government in the Assembly in last July, said.

“The Rabi sowing area has declined by 34 per cent in Tikamgarh and Chhattarpur districts in the present season owing to the drought. But other districts in Bundelkhand region such as Panna, Damoh and Sagar have witnessed a normal Rabi sowing of 94 to 95 per cent,” Sagar divisional commissioner Asutosh Awasthi told this newspaper. “Tikamgarh and Chhattarpur have been identified as the worst drought-affected districts in the Bundelkhand region this year,” he added. He, however, said the government is implementing different employment generation programmes to mitigate distress conditions of people in the region.

Large-scale migration from the region has raised a question mark on the effective implementation of government-sponsored job creation schemes such as MNREGA etc.

“Exodus from Bundelkhand has increased manifold in the past several months. Around 15,000 people, including women and children, are leaving their villages daily,” a state labour department official said.