Nitish Kumar, Sushil Kumar Modi and Ram Vilas Paswan moved from one venue to another to join feast hosted by leaders of NDA constituents. 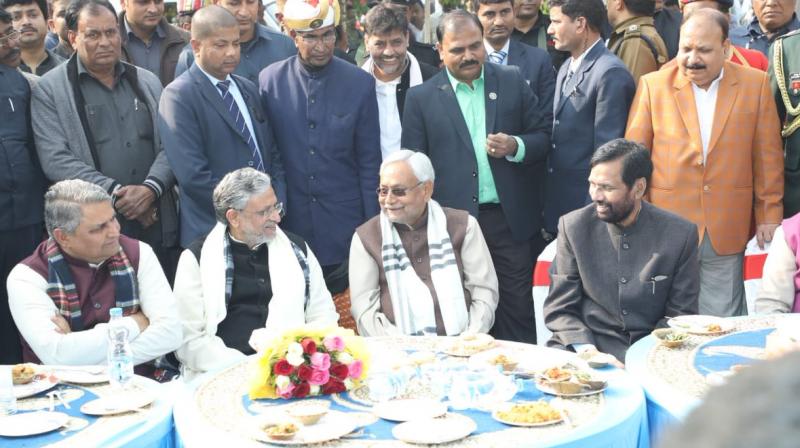 Patna: Leaders of the ruling NDA in Bihar on Monday sought to project an image of bonhomie as they treated themselves to sumptuous helpings of dahi-chura (curd and flattened rice) as part of Makar Sankranti festivities.

Chief Minister Nitish Kumar, his deputy Sushil Kumar Modi and Union minister Ram Vilas Paswan moved from one venue to another to join the feast hosted by leaders of the three NDA constituents in a display of unity.

BJP, JD(U) and LJP have already announced seat-sharing among them for the coming Lok Sabha election in Bihar.

Paswan was joined by his son and LJP parliamentary board chief Chirag Paswan and brothers Ram Chandra Paswan and Pashupati Kumar Paras, MP and minister in Bihar government respectively, in welcoming the guests, who were also treated to other delicacies prepared with jaggery and til (sesame), consumption of which is believed to be auspicious on this day.

Nitish Kumar and Sushil Modi also attended a similar function hosted by Vashishtha Narayan Singh, Rajya Sabha member and state president of the JD(U), which is headed by the chief minister.

Appearance of RJD MLC Sanjay Prasad and former state Congress president Ram Jatan Sinha at the function raised some eyebrows though both the leaders insisted that they had personal relations with the host, a veteran socialist leader who has been organising feasts on Makar Sankranti for years.

Feasts were also hosted by several other leaders in various parts of the city, notable among these being the one hosted by BJP MLC Rajnish Kumar where besides Kumar and Modi, Paswan figured among the guests.

Paswan also turned up at the bhoj organised by senior BJP leader and Union minister Ashwini Kumar Choubey, intra-party rivalry took a backseat as he was seen greeting Modi with a warm hug and an ear-to-ear grin.

The festivities were conspicuous by their absence in the opposition Grand Alliance camp, with most leaders heading their respective parties remaining out of the state capital.

The RJD has been giving celebrations a slip since last year after its national president Lalu Prasad, who is credited with having made the tradition of dahi chura bhoj popular as a political gesture, was jailed.

His wife Rabri Devi had made it clear last week that there would be no celebration this year and their younger son Tejashwi Yadav spent the day in Lucknow, expressing solidarity with the SP-BSP alliance.

According to astrological calculations, the Sun this year enters the Tropic of Capricorn on January 15, though traditionally people have been observing the festival on January 14.