‘We are alive to the threat on cyber front. To that end we are thinking of making a cyber agency,’ Lt Gen Naravane also said. 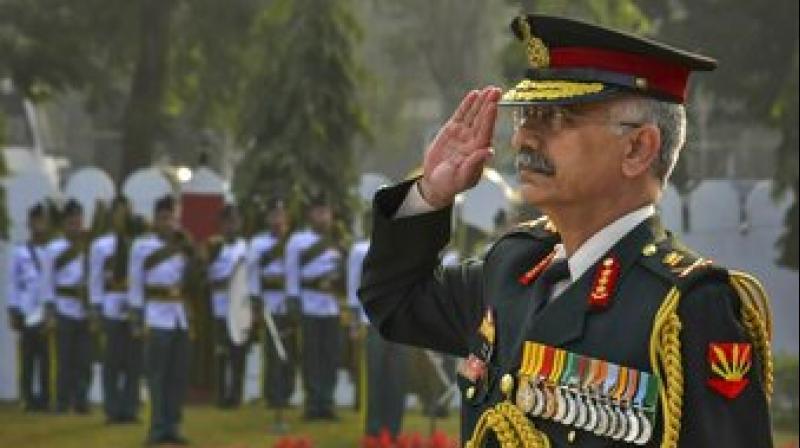 ‘We don't anticipate any trouble because the whole process has been done quite systematically,’ Lt General M M Naravane. (Photo: PTI)

Kolkata: Eastern Command General Officer Commanding-in-Chief Lieutenant General M M Naravane ruled out any possible "fallout" of the National Registrar of Citizens (NRC) when its final list would be published.

He affirmed that the army is always prepared to tackle any situation however. Lt General Naravane was speaking to the media after laying wreath at Vijay Smarak in Fort William, the Headquarters of the Eastern Command on the occasion of the Army Day.

On the recent violence over the NRC in some North Eastern states, Lt Gen Naravane said, "Various lists and drafts have been published from time to time in the last six to eight months. There were always apprehensions about certain repercussions in the civil society as and when the lists are published."

He elaborated, "However so far the whole procedure has gone quite smoothly. There are provisions in NRC of putting your claims and objections. That procedure is also on. All told, I feel there should not be any great fall out of NRC. We are always prepared for everything. We don't anticipate any trouble because the whole process has been done quite systematically."

The Eastern Army Commander observed, "Everyone has had a voice or opportunity to air their grievances. Everything is catered for. Why should we anticipate any trouble when there is no cause for any grievance on any accounts?"

Giving details of the Indian armed forces initiative to tackle cyber threats Lt Gen Naravane explained, "We are alive to the threat on cyber front. To that end we are thinking of making a cyber agency. It would not be a quite full fledged command as we have in the army. As conscious of the fact that the threat exists, we are going in for the cyber agency. It will be headed by a two-star rank officer. It will be an inter-service agency, not purely army, functioning under the Integrated Defence Staff. They will be looking after the threats in the cyber domain."

He said, "The entire proposal is still under the formulation. Of course units will be spread all over the country. One person sitting in Delhi can not be expected to do all these jobs. There will be units in every Headquarters with dedicated officers to deal with the cyber security." Sources revealed that the agency strength will be 200 personnel initially.