According to Congress, a group of 'missing' lawmakers is proof that the BJP has launched 'Operation Lotus'. 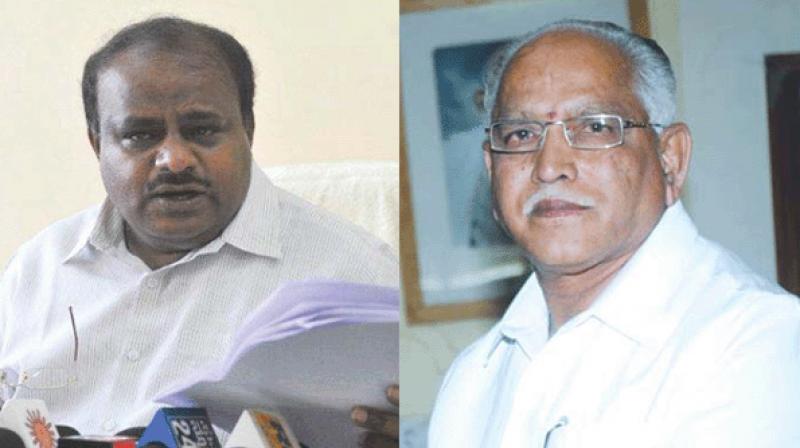 In the 224-member Karnataka Assembly, the JD(S)-Congress combine has 118 lawmakers, more than the majority mark of 113. The BJP has 104 lawmakers and is far short of the required numbers. (Photo: File)

Bengaluru: A new political turmoil in Karnataka erupted as the BJP flew its 104 lawmakers to Delhi from Bengaluru and then to a luxury resort in Gurgaon, alleging that Chief Minister HD Kumaraswamy was trying to split its ranks.

BJP leader and former chief minister BS Yeddyurappa denied the Congress’ counter-allegations that opposition is the one trying to form an “alternative government” and said “The Janata Dal-Secular (JDS) wants to break BJP lawmakers. We are united. We will stay in Delhi for one or two days.”

“There are 104 BJP MLAs and we're together. We were called here (Gurgaon) to strategise for the upcoming Lok Sabha elections. There are no talks of forming a government, but if there's anything, our leaders will tell you,” she said.

According to Congress, a group of “missing” lawmakers is proof that the BJP has launched “Operation Lotus”. This term was first used in 2008 when the BJP was accused of inciting several opposition legislators to defect to ensure the stability of its government headed by Yeddyurappa.

In the 224-member Karnataka Assembly, the JD(S)-Congress combine has 118 lawmakers, more than the majority mark of 113. The BJP has 104 lawmakers and is far short of the required numbers.

However, Congress alleges that it is trying to muster up the numbers which is why their five lawmakers have gone missing.

On Monday, Kumaraswamy claimed that the missing lawmakers are in a Mumbai hotel and are in constant touch with him.

Read: Cong MLAs informed me before going to Mumbai: K'taka CM on horsetrading

Deputy Chief Minister, G Parameshwara of the Congress said, “Some of our MLAs have gone, they can go for temples, holiday, family outings, we don't know. All our MLAs are intact.”

Among the “missing” lawmakers is Ramesh Jarakiholi, who was dropped recently by Kumaraswamy in a cabinet shuffle. The others are Anand Singh, B Nagendra, Umesh Jadhav and BC Patil.