A doctor had to conduct plastic surgery in mobile light as lights over the operation table went off. 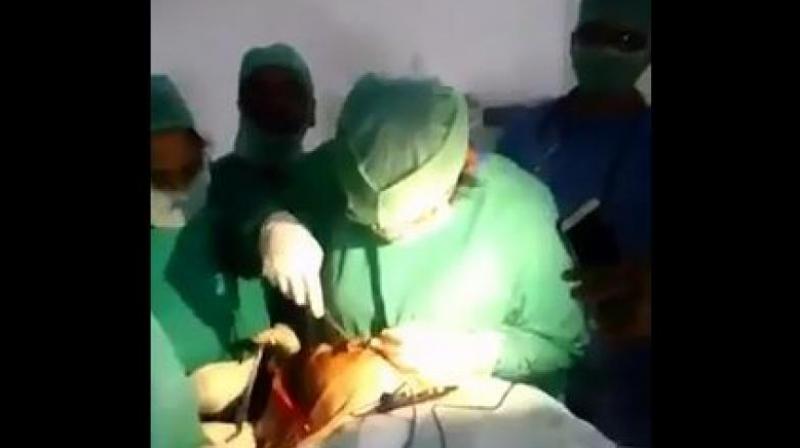 The incident took place on Saturday at the Guntur Government Hospital inside an operation theatre that has two tables. (Photo: SCreengrab | YouTube)

Guntur: It’s not only shocking but also bizarre. Doctors are known as life savers and a little mistake while performing a surgery can cost a patient his or her life. A doctor in one of the largest government hospitals in Andhra Pradesh had to conduct a delicate plastic surgery in mobile light as the lights over the operation table went off. A video of the surgery is doing the rounds in the state.

The incident took place on Saturday at the Guntur Government Hospital inside an operation theatre that has two tables.

Suddenly in the middle of the operation, the lights on one of the tables went off. In the video, a doctor can been seen at work, assisted by two nurses as another person holds a mobile phone torch.

According to an NDTV report, hospital superintendent Dr DS Rajanayak said that a fuse had blown off during routine maintenance work. The operation theatre has full power back-up and it was not known why the lights failed to come on immediately. It took four to five minutes to restore the lights.

Several videos of surgeons working under flashlights have surfaced from various parts of the country.

In 2016, doctors at one of Hyderabad's biggest hospitals - the Gandhi Hospital -- admitted that they had to work in the light of mobile phones in the middle of a critical operation that involved the removal of an infected part of one's intestine.

Dr Rajanayak said such power failures are not usual at the Guntur hospital. "The surgeon Dr Sunitha, who is an assistant professor of plastic surgery, did the best she could under the circumstances,'' he added.

The patient, who needed a nose reconstruction surgery after a dog bite, is doing well, Dr Rajanayak said.