The decision to call an all-party meet was taken during a meeting of Cabinet Committee on Security at PM Modi’s residence in Delhi. 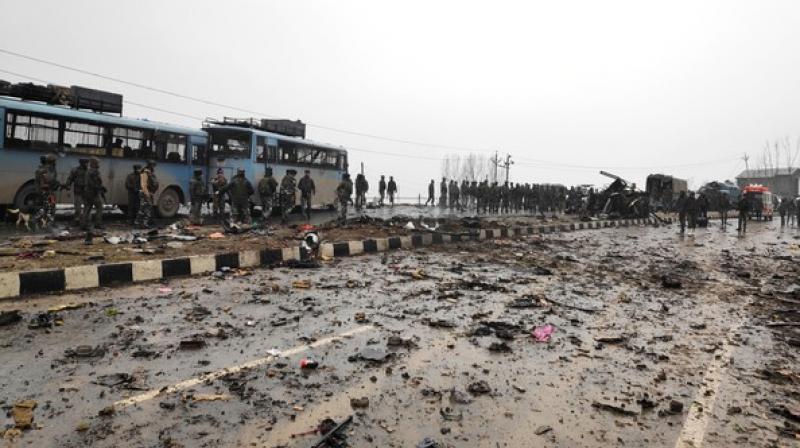 A convoy of 78 vehicles carrying more than 2,500 Central Reserve Police Force jawans from Jammu to Srinagar was targeted in a suicide bombing. (Photo: ANI)

New Delhi: An all-party meeting called by the Modi government begins in Parliament library about the Pulwama terror attack and security situation in Kashmir.

The meeting convened by Home Minister Rajnath Singh, who was in Kashmir on Friday to take stock of the situation, is being attended by Ghulam Nabi Azad, Anand Sharma and Jyotiraditya Scindia of the Congress, Sudip Bandyopadhyay and Derek O'Brien of the TMC, Sanjay Raut of the Shiv Sena, Jithendra Reddy of the TRS, D Raja of the CPI, Farooq Abdullah of the National Conference, Ram Vilas Paswan of the LJP among others.

Political parties have closed ranks following the attack and have offered their support to the NDA government on its response on the matter. Prime Minister Narendra Modi has talked tough and asserted that those behind it will be punished, and his government has launched a diplomatic offensive to isolate Pakistan within the international community.

As many as 40 CRPF jawans were killed in one of the biggest terror attacks on security forces in Jammu and Kashmir. Pakistan-based terror organisation Jaish-e-Mohammad has claimed responsibility for it.