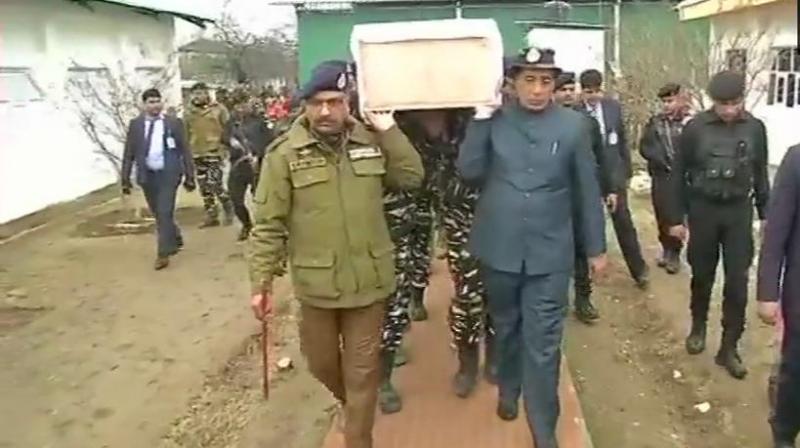 New Delhi: Union Home Minister and Jammu and Kashmir top police Dilbagh Singh on Friday carried the coffin of a CRPF official who was killed in Pulwama terror attack on Thursday.

Shortly after arriving from Delhi, the Home Minister attended a solemn function here where the remains of 40 CRPF personnel were kept in coffins, draped with tricolour.

Rajnath Singh, who on Thursday, assured the country that the government will "undertake whatever it takes to avenge this", carried the coffin wrapped in the national flag on his shoulder.

Director General of Police lifted another side of the coffin and walked together, helped by other officials.

The dignitaries stood in silence till the coffins were loaded in a truck which went to the Srinagar airport, the official said. Forty CRPF personnel were killed and five injured on Thursday in one of the deadliest terror attacks in Jammu and Kashmir when a Jaish-e-Mohammad suicide bomber rammed a vehicle carrying over 100 kg of explosives into their bus in Pulwama district.