The major suicide attack on a CRPF convoy by Pakistan based Jaish-e-Mohammed, sparked outrage and condemnation from across the world. 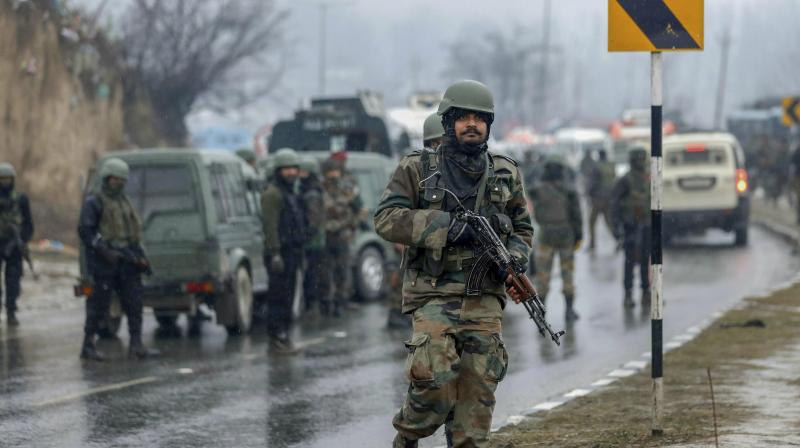 New Delhi: The major attck on a CRPF convoy by Pakistan based Jaish-e-Mohammed, often described as a lapdog of the ISI, sparked outrage and condemnation from across the world.

One of the very first world leaders to express condolences was Russian President Vladimir Putin, condemning “this brutal crime.”

The perpetrators and sponsors of this attack, undoubtedly, should be duly punished,” said Putin extending his support to PM Modi

“The Government of Nepal strongly condemns the terrorist attack in Jammu and Kashmir today (Thursday) that has resulted in the loss of many precious lives,” the release from Nepal’s Ministry of Foreign Affairs put forth late Thursday.

“The heinous act of terror in Kashmir has all the hallmarks of a common source and sponsor of terrorism in our region. It is a copy paste of what Pakistan backed terror groups do in Afghanistan. We condemn the attack and convey our condolences to Indian people,” Amrullah Saleh, the acting Minister of Interior of Afghanistan, tweeted in the aftermath of the heinous assault.

Europeans also stretched out a hand of support to India and expressed their sadness and condolences to the Pulwana attack.

“…Our thoughts go out to the families of the fallen soldiers. France has always been and always will be by India’s side in the fight against terrorism in all its forms,” declared Alexandre Ziegler, the French ambassador in Delhi.

“….I call on each state to effectively combat terrorist networks and their funding channels and to prevent the cross-border movement of terrorist groups, such as Jaish-e-Mohamed, who has claimed responsibility for this attack,” added the French Minister of Europe and Foreign Affairs, Jean-Yves Le Drian.

“Israel stands by our Indian friends during this difficult hour. We send our deepest condolences to the CPRF and their families, the people of India and the Indian government following the terrible  Kashmir Terror Attack,” said Ambassador Dr Ron Malka.

PM of Israel Benjamin Netanyahu: To my dear friend, Prime Minister of India Narendra Modi, we stand with you, the security forces and the people of India following this heinous terrorist attack. We send our condolences to the families of the victims. #PulwamaAttack (file pic) pic.twitter.com/v029Sr4cvl

“Germany strongly condemns today's heinous terrorist attack in Jammu and Kashmir. Our thoughts are with the victims and their families,” said the German Embassy.

“…We denounce terrorism in all its forms and manifestations and reiterate the need to combat these inhuman acts with decisive and collective response without any double standards. May we express sincere condolences to the grieving families of the deceased and wish a speedy recovery to those injured,” said a statement issued by the Russian Embassy in Delhi.

South Korea Foreign Ministry: We strongly condemn the terrorist attack on the CRPF in Pulwama, Jammu & Kashmir on February 14 & extend deepest condolences & sympathy to those who lost their lives in the attack and their bereaved families.

Closer home, Sri Lanka’s Prime Minister Ranil Wickremesinghe tweeted  “the brutal terrorist attack in Kashmir's Pulwama district (was) the worst ever terror attack in Jammu and Kashmir since 1989. I express my condolences to @narendramodi and the families of police officers who lost their lives.”

I strongly condemn the brutal terrorist attack in Kashmir's Pulwama district — the worst ever terror attack in Jammu and Kashmir since 1989. I express my condolences to @narendramodi and the families of police officers who lost their lives.

"It was with deep shock and horror that I learnt of the bomb blast in Pulwama, Kashmir, that caused tragic loss of life and distress to many dozens of CRPF personnel,”  wrote Abdulla Shahid, the Maldives foreign minister in a message to external affairs minister Sushma Swaraj.

UAE Ministry of Foreign Affairs and International Cooperation: The UAE stands in solidarity with the government and people of India in their fight against violence and extremism. #PulwamaAttack

At least 40 Central Reserve Police Force (CRPF) personnel were killed and more than a dozen others injured on Thursday when a Jaish-e-Mohammed (JeM) terrorist rammed an explosives-laden SUV into their bus in Pulwama district.