The elections were conducted for a single-phase election in 40 ACs in Goa, 70 ACs in Uttarakhand 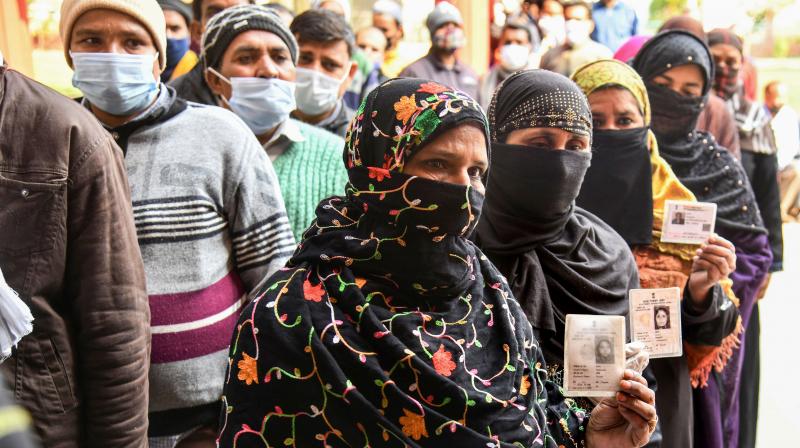 omen holding their identification cards, stand in a queue to cast their votes, during the Uttarakhand Assembly polls, at a polling station, in Dehradun, Monday, Feb. 14, 2022. (PTI Photo)

New Delhi: Goa recorded a high voter turnout of 78.94 per cent in the single-phase Assembly election held on Monday while Uttarakhand recorded 62.5 per cent and the second phase in Uttar Pradesh saw a 61 per cent turnout as polling for 165 Assembly constituencies were held across the three states.

“More than 2.95 crore electors were registered to vote in 165 Assembly constituencies. Polling was conducted peacefully in 36,823 polling stations spread across 165 Assembly constituencies, in Uttarakhand, Goa and for the second phase in Uttar Pradesh,” the Election Commission said. The elections were conducted for a single-phase election in 40 ACs in Goa, 70 ACs in Uttarakhand and for 55 ACs in Uttar Pradesh’s second phase of the Assembly elections.

Uttarakhand chief minister Pushkar Singh Dhami said with confidence that all trends were showing that the ruling BJP will return to power in the hill state. “People in Uttarakhand have created history by voting in huge numbers. I hope that the new government will work for a golden future of Uttarakhand… I am content, there is no doubt that the BJP will return to power. We will impose the Uniform Civil Code and create jobs for the youth,” Mr Dhami said.

The voting in Uttarakhand was largely peaceful, except for some minor scuffles between supporters of political parties reported in Haridwar and Nainital districts.

Goa used Artificial Intelligence tools at several polling booths. “They helped us to keep a count of voters standing in the queues. We will be improvising the same in future elections to monitor booths,” said Goa’s nodal IT officer Praveen Volvotkar. The highest voter turnout was in Sanquelim constituency, with 89.61 per cent, while the lowest was in Benaulim, with 70.2 per cent voting. North Goa recorded a voter turnout of 79.84 per cent and South Goa recorded 78.15 per cent.

The state saw a brief spell of tension in Benaulim after some supporters of sitting MLA Churchill Alemao tried to corner AAP candidate Venzy Viegas while Congress and BJP workers got into a verbal duel at a Vasco polling station, prompting the Goa police and the flying squad to intervene.

The Aam Aadmi Party’s Goa CM candidate Amit Palekar said this was the moment to bring change. “People are voting enthusiastically to defeat corruption and we will witness a sea change. Let’s wait for the March 10 results,” he said.

In UP’s Sambhal, BJP candidate Rajesh Singhal sat on a protest alleging fake voting. Saharanpur had the highest polling percentage of 71 per cent among all districts in Phase 2 in Uttar Pradesh.

Claiming “historic voting” for SP-RLD candidates, Samajwadi Party chief Akhilesh Yadav said the people have subdued the “garmi” (haughtiness) of chief minister Yogi Adityanath in the first two phases in UP. Mr Yadav took on Mr Adityanath, saying he used to claim ahead of the elections that the “khoon ki garmi” (haughtiness, enthusiasm) of the SP and RLD leaders would be subdued after the elections.

“After the first two phases, the people have pacified the ‘garmi’ of those who were talking of curbing others’ enthusiasm (garmi nikal denge) after the elections,” Mr Yadav said, while addressing an election rally in the Bundelkhand region. “Now, after the third phase, the people of Bundelkhand will make him ‘thanda’ (cool down),” he said.