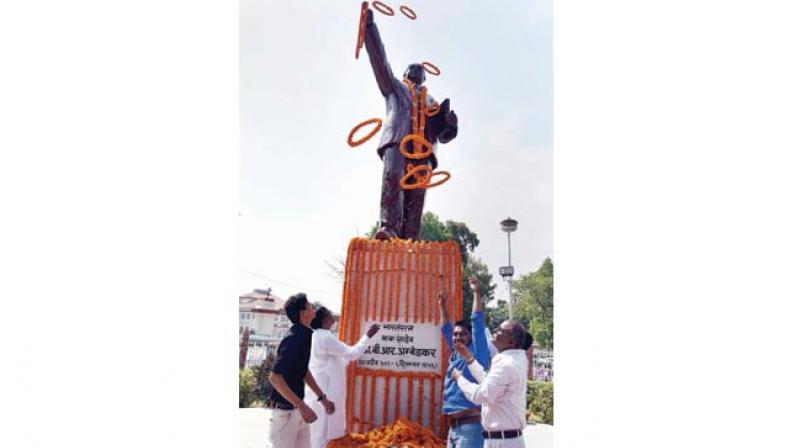 Jangla (Chhattisgarh)/New Delhi: The battle for Ambedkar’s legacy continued unabated with both the Congress and the BJP intensifying their attempts to embrace the social icon on his 127th birth anniversary on Saturday. Even as BJP and Congress leaders, including Prime Minister Narendra Modi, Amit Shah and Rahul Gandhi, made a beeline to pay tributes to Ambedkar, both the parties accused each other of being anti-dalit.

Paying glorious tribute to Ambedkar at a special function in the remote village of Jangla in Chhattisgarh, Mr Modi said “I am PM because of Babasaheb” even as he helped a Dalit woman wear a pair of slippers.

Mr Modi, who was slated to present a pair of slippers to a tribal woman, surprised the crowd when he walked up to her, bent down and helped the bare-footed woman wear her new pair of slippers. The symbolic gesture received a loud applause.

“If a person of a humble background like me could become PM, it is because of Babasaheb Ambedkar”, Mr Modi said while rolling out Ayusman Bharat Yojana, popularly known as “Modicare”, in the tribal-dominated south Bastar district of Bijapur which is a Naxal-stronghold.

The Ayushman Bharat scheme aims to work on the development and upgradation of sub-centres and primary health centres in 1.5 lakh villages.

Mr Modi said that B.R. Ambedkar had made provisions in the Constitution for the protection of the rights of backward classes and appealed to people not to join Naxals for securing their rights.

“Baba Sahab has given us the Constitution. He ensured protection of your rights... It is the duty of the government to take care of your rights. You need not pick up weapons... Ruin your lives,” the Prime Minister added and asked the parents of those who had joined Naxalism not to hand over their children’s lives to leaders who keep themselves safe while letting the locals die.

While Rahul Gandhi tweeted paeans — “Paying rich tribute to Baba Saheb Ambedkar on his birth anniversary. His thoughts and struggle will keep inspiring us in our struggle to bring equality, human dignity and social justice in the society” — the Congress accused the BJP of “eroding” the legacy of Baba Saheb Ambedkar and said the Prime Minister was merely paying lip service to Ambedkar.

“You are robbing them (dalits) of their scholarships, you are participating in conspiracies to dilute their reservations and then you are shedding crocodile tears in the name of dalits,” Congress spokesperson Abhishek Singhvi said and added that the BJP can inaugurate as many memorials as they like, “but the fact is that they are reducing sub-plans, financial allocations”.

The Congress’ Kumari Selja, former Union minister and a dalit leader, also charged that the Prime Minister was doing politics over the legacy of the dalit icon.

“The BJP and RSS have an ‘anti-dalit’ mindset as their government has abolished the sub-plan for SC/STs, have talked of ending reservation and amendment to the Constitution which was framed by Ambedkar,” she said.

In Gujarat’s Vadodara, meanwhile, members of the dalit community on Saturday “cleansed” a statue of B.R. Ambedkar after women and child development minister Maneka Gandhi and some BJP leaders paid floral tributes on his birth anniversary.

Soon after Ms Gandhi arrived at the Ambedkar’s statue, along with BJP MP Ranjanben Bhatt, city mayor Bharat Dangar, BJP MLA Yogesh Patel and others, members of the dalit community started raising slogans against them.

After Ms Gandhi and other leaders garlanded the statue around 9 am and left the venue, the protesters washed it with milk and water, saying the BJP leaders’ presence had “polluted” the statue.

“We told the police that since we had gathered there much before the BJP leaders came, it was our right to pay tributes first. However, police prevented us from garlanding the statue, stating that as per the protocol, it was the mayor’s right. This angered our members,” a local dalit leader said.

In other incidents, there was tension in Phagwara town of Punjab’s Kapurthala district after a late night clash between two groups over the installation of a Babasaheb B.R. Ambedkar statue. In Gorakhpur, Uttar Pradesh, dalit leaders took strong objection to the painting of the upper part of an under-construction Ambedkar memorial saffron.