Odisha Police’s pigeon service said to be one of its kind in the world. 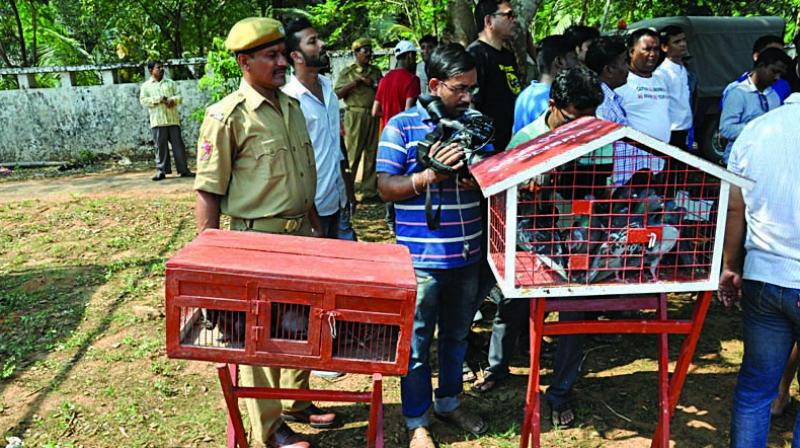 Pigeons at OUAT grounds in Bhubaneswar before being flown to Cuttack

Bhubaneswar: The fifty carrier pigeons (CPs) of Odisha police were flown from the OUAT Grounds here and they travelled to their destination in Cuttack city with messages tied to their legs.

Carrying the missives with a message on heritage conservation and preservation, they reached the 20-km destination in just a few minutes without stopping on the way. The flight event was organised by Indian National Trust for Arts and Cultural Heritage (INTACH).

The Odisha Police Pigeon Service, which is more than 70 years old, remains the only one of its kind in the world. This remarkably sophisticated unique service is a pleasant anachronism in this day of telecommunications, e-mail and networking.

The Odisha Police Pigeon Service dates back to 1946 when 200 pigeons were handed over to them by the army on an experimental basis to establish communications with areas that had neither wireless nor telephone links.

The service was first pioneered in the mountainous Koraput district, and its success and reliability resulted in it being introduced in almost all the districts with over 700 sturdy Belgian Homer pigeons ferrying messages to assigned destinations.

The Service was headquartered in Cuttack where a breeding centre was set up. For years, these dependable birds have been a vital link between remote police stations when traditional communications failed, they have delivered messages beating storms, disasters — and birds of prey. The messages, written on a piece of paper are inserted into plastic capsule, which are tied to the feet of the pigeon. These pigeons were extensively used during floods and the Super Cyclone in 1999, as radio networks were disrupted. The pigeon service was the only line of communication to the marooned town of Banki during the disastrous flood in 1982, when almost all communication lines had collapsed. The pigeons have  also helped nab criminals.

Speaking on the occasion, Amiya Bhusan Tripathy, the former Odisha director general of police (DGP) and state convener of INTACH, praised the police department for keeping the service alive and flying. He lauded the determination of the men who run India's only police pigeon service and have guaranteed its survival into the next millennium.

B N Das, superintendent of police (SP-Signal) said that Odisha was the only state in India to use carrier pigeons to communicate among police stations. He said that the Pigeon Service was still kept alive due to its rich and glorious tradition.

Anil Dhir from INTACH who is also an eminent philatelist, said that this unique aspect of Odishan heritage should be highlighted. He said that nowhere else in the world is such a service still in operation officially.