Elderly hogs limelight with youth taking selfies with her. 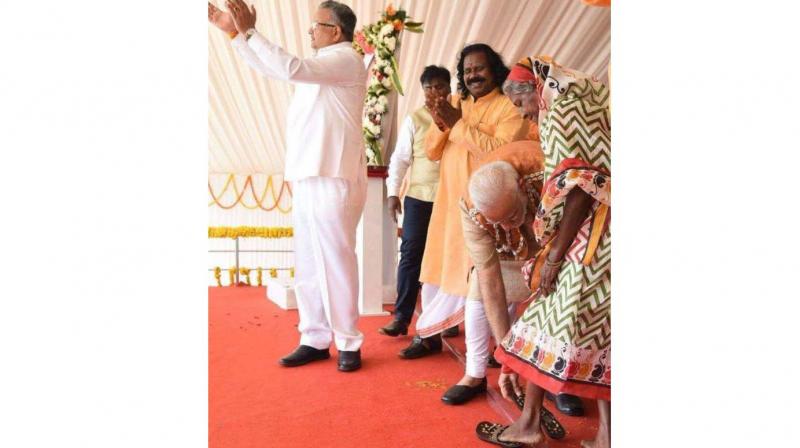 Prime Minister Narendra Modi later came forward and helped her wear the footwear amid rapturous applause from the gathering.

Jangla (Chhattisgarh): A pair of slippers brought sparkles in the eyes of Ratna Bai (62), a tribal woman of Bastar in Chhattisgarh, and in her fortunes, too.

For she literally turned a celebrity, hogging the media limelight, after Prime Minister Narendra Modi helped her wear a pair of slippers on the sidelines of the launch of Ayusman Bharat Yojana, a health scheme for the poor, at Jangla in Chhattisgarh’s south Bastar district of Bijapur on Saturday.

“It used to be very painful for me when I collected tendu leaves barefoot in forests during summer. My feet used to get swollen due to the summer heat. The slippers will protect my feet from getting burnt and injured,” a nervous looking Ratna Bail told mediapersons, who literally mobbed her for a quote and bite after she disembarked the stage where the PM helped her wear the footwear.

The tribal woman was speaking in her mother tongue, tribal Halwi dialect.

A local tribal was arranged to translate her language for the media.

Amid this, quite a good number of youth were seen taking selfie with her.

She could hardly make out the limelight she was receiving and was seen smiling nervously all through. She rather appeared eager to join her family members who were present in audience.

For nearly two hours, she became the centre of attraction at the event.

A senior officer of the Chhattisgarh government told this newspaper that she was instructed to go to the stage only when her name was called.

Accordingly, she claimed the stage barefoot and was greeted by the PM.

Prime Minister Narendra Modi later came forward and helped her wear the footwear amid rapturous applause from the gathering.