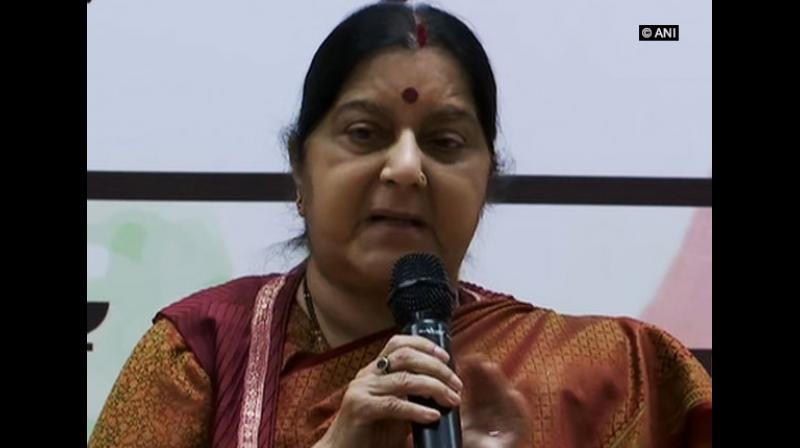 Swaraj appealed Mulayam to not remain silent on the matter. (Photo: File)

Referring to Draupadi's cheer-haran (disrobing) - a scene from epic Mahabharata in which Pandavas lost a bet to their usurping cousins - Swaraj appealed Mulayam to not remain silent on the matter.

"Mulayam Bhai - You are the father figure of Samajwadi Party. In front of you, Draupadi is being disrobed in Rampur. Do not make the mistake of being silent like Bhishma@yadavakhilesh Smt.Jaya Bhaduri, Mrs.Dimple Yadav," she tweeted in Hindi.

Khan, while addressing a poll campaign rally in his parliamentary constituency Rampur on Sunday, had said, “I brought her (Jaya Prada) to Rampur. You are a witness that I did not allow anyone to touch her body. It took you 17 years to identify her real face but I got to know in 17 days that she wears khaki underwear.”

However, asserting that he did not name anyone, the SP leader said he would withdraw his candidature from the ongoing polls if proved guilty.

"I have said that people took time to know real face in reference to a man once said that he brought 150 rifles with him and if he sees Azam, he would have shot him dead. My leaders also did a mistake. Now, it has been revealed that he has an RSS pant on his body. Short is worn by men," Khan told ANI on Sunday.
"I was a nine-time MLA from Rampur and been a minister. I know what to say. "If anyone proves that I have named anyone and insulted anyone by name. If it is proved, I will step back from the elections," he added.

Khan also accused the media of misinterpreting his comments.

The actor-turned-politician had won the Rampur Lok Sabha seat in 2004 and 2009 on SP ticket but was later expelled on account of alleged anti-party activities in 2010. She had joined the BJP last month.