India   All India  15 Apr 2019  Japan’s investments in India have not been without pitfalls
India, All India

Japan’s investments in India have not been without pitfalls

Japan is the 3rd-largest investor in India with a cumulative FDI of $26 billion in the period 2000-2017, constituting 8% of the total FDI in India. 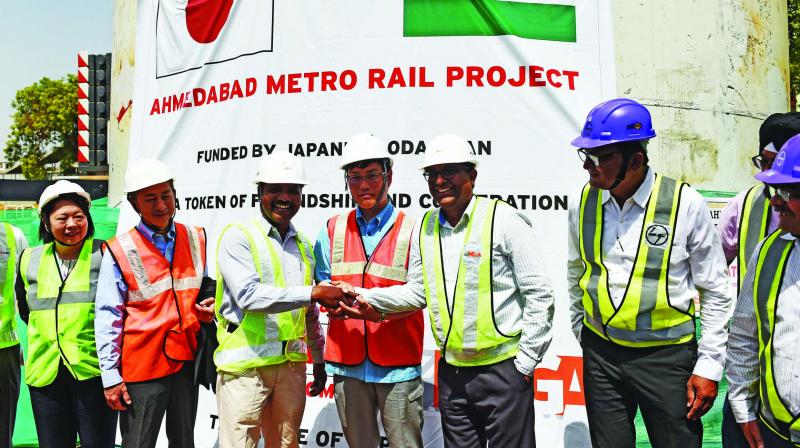 The ongoing contempt case in the Supreme Court by Japanese company Daiichi Sankyo against the former promoters of Ranbaxy has drawn considerable attention in the context of Japanese investment in India. In September 2014, in the first interaction with Prime Minister Narendra Modi, Japan’s Prime Minister Shinzo Abe had promised $35 billion in corporate investments and financing for infrastructure development in India. Mr Modi had assured special mechanisms to fast-track approvals for Japanese investors. Mr Abe had also set a target of doubling the Japanese companies operating in India in five years.

In 2018, Japanese portfolio investment was slack as the Indian economy grappled with rising current account as well as budgetary deficits. The net inflow from Japanese funds to Indian equities slipped to about $550 million in 2018 as compared to about $7.5 billion in 2017. Japanese fund managers felt that Indian firms had high valuations fuelled by large US-based pension and investment funds. The uncertainties of the unpredictable May 2019 parliamentary elections in India added to this caution on the part of Japanese investors.

Japanese investors and corporates are rather conservative by nature and risk-averse by tradition. In comparison, Korean Chaebol patriarchs are ready to take calculated risks and venture boldly into uncharted waters.

Maruti-Suzuki, the first major Japanese investment in India in the early 1980s continues to be a shining example of successful operations by a large Japanese corporation in India. Toyota Motor Corporation’s partnership with the Indian group Kirloskar forged in 1997 has also been hugely profitable. However, some more recent major Japanese investments in India’s manufacturing and services sector have failed, making the Japanese boards hesitant.

In 2008, Daiichi-Sankyo had acquired a 63.9 per cent stake in the pharma major Ranbaxy for $4.2 billion. As the company did not succeed in restoring compliance at Ranbaxy facilities as directed by US FDA, by 2015 the value of the Daiichi investments had halved. Daiichi sold its stake in Ranbaxy to Sun Pharmaceuticals in return for an 8.9 per cent stake in Sun Pharma. Subsequently, it exited from Sun Pharma, also selling its share for about $3.2 billion. The Japanese company incurred a loss of about 30 per cent in dollar terms, thus badly burning its fingers. Allegedly, the Indian owners had concealed critical information regarding the ongoing US FDA investigations in some of its most profitable formulations. The ongoing contempt case involves a payment of Rs 3,500 crores by Ranbaxy’s Singh brothers to Daiichi.

In another negative development, the Japanese digital imaging equipment maker RICOH suffered a loss of more than Rs 1,000 crores allegedly due to falsification of accounts by the managers of their Indian branch. Reportedly, RICOH India owes related parties RICOH Japan and RICOH Asia-Pacific over Rs 1,500 crores.

In 2009 the Japanese telecom giant NTT Docomo bought a 26.5 per cent stake in the iconic Tata group company Tata Teleservices with an investment of approximately $2 billion. The agreement stipulated that if certain performance benchmarks were not met, the Japanese could quit with a minimum recovery of roughly half of their investment. When in 2015, NTT Docomo exercised the option of quitting, it led to a legal battle with Tata Teleservices, ending in international arbitration in London. In 2016 the arbitration tribunal awarded Docomo damages amounting to $1.17 billion. The enforcement of the arbitration award was initially challenged by Tata Teleservices but following a Delhi high court verdict in favour of Docomo, the Tata group finally settled with their Japanese partners. However, the failure of this large investment and the consequent legal dispute cast a shadow on the sentiments of Japanese investors looking at the Indian market.

Despite these setbacks, Japanese investments in India in 2016-17 rose to $4.7 billion, recording a significant increase from $2.6 billion in the preceding year. Japanese companies are now investing in diverse sectors like retail trade, textiles, consumer durables and credit card services. More investment from Japan is expected as work is on to establish 12 industrial parks dedicated to Japanese companies as part of economic corridors across various states.

It is notable that Japan is the third-largest investor in India with a cumulative FDI of $26 billion in the period 2000-2017 constituting 8 per cent of the total FDI in India. A major Japanese fund Softbank is betting heavily on India’s start-up sector and has made significant investments in Flipkart, OYO, Paytm, Ola, Grofers, Snapdeal, etc. Other notable Japanese investor funds are Rebright Partners, Mistletoe and Dentsu Ventures. Of course, the high-speed train between Mumbai and Ahmedabad would be the future flagship of Japanese technical and financial assistance to India.

Japanese corporate investment in India’s manufacturing sector is largely driven from strong political support by the two Prime Ministers. Japanese boards however continue to be cautious in opting for major green field projects in India. They are deterred by our work culture, unpredictability of tax and other rules and regulations and long timelines in project implementation. As the Japanese look for diversifying investment destinations, their choice has fallen on countries like Vietnam. In a recent survey of 630 Japanese firms, 35.7 per cent chose Vietnam as the most promising economy for investment with India at the second place preferred by 17.8 per cent of the respondents. It is sobering to note that Japanese FDI in Vietnam till 2018 was more than $58 billion constituting about 22.4 per cent of total FDI in Vietnam. Vietnam scores over India because of its high growth, disciplined work force and its emergence as a production hub in global value chains. India’s main attractions are its high growth potential and large consumer market.

Japanese investments in India are on the right trajectory but much remains to be done to make India more attractive for higher investments, particularly in the manufacturing sector.

The writer is a retired ambassador