BJP youth wing convenor Priyanka Sharma said she would fight this case and would not apologise. 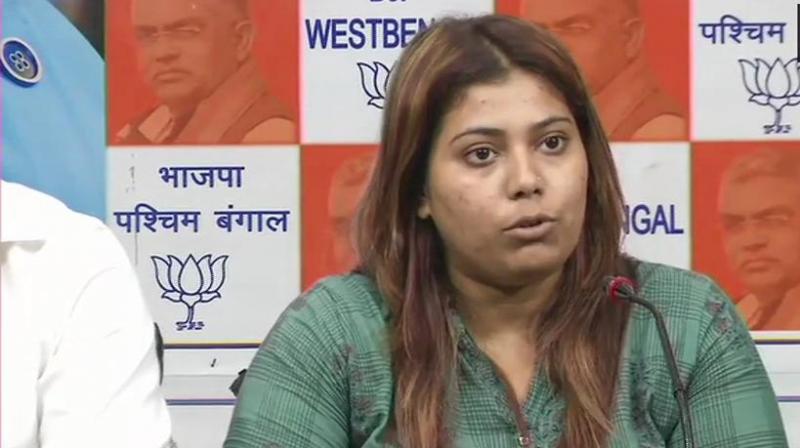 She said, 'My bail was granted yesterday (Tuesday), but still wasn't released for another 18 hours. They didn't allow me to meet my advocate and family.' (Photo: ANI | Twitter)

Kolkata/New Delhi: BJP youth wing activist Priyanka Sharma, who walked out of jail on Wednesday after being arrested for posting a morphed picture of West Bengal Chief Minister Mamata Banerjee on Facebook, said she would not apologise.

"I don't have any regrets. I have not done anything for which I will have to apologise," Sharma told a press conference at the BJP office here.

She was released at 9.40 am from the Alipore jail after five days following a Supreme Court order. The BJP activist alleged that she was harassed and tortured inside jail.

"I was tortured in the jail. Even the jailer pushed me yesterday. I told them I am not a criminal that you are pushing me into the jail room like this," she said. "They behaved very rudely. The condition inside was very bad." Local BJP leaders and her mother were present outside the jail in south Kolkata when she was released. "Me and my family has gone through much agony which I think I don't deserve," Sharma said.

Her brother, Rajiv Sharma, alleged that the jail authorities violated the Supreme Court order by not releasing her on Tuesday. "When we went to the jail yesterday, officials said they needed a hard copy of the order. I am in Delhi and it took time to get the hard copy of the order and therefore the delay. They did not abide by the Supreme Court order of immediate release," he said.

Earlier on Wednesday, the Supreme Court termed as "prima facie arbitrary" the arrest of BJP's youth wing leader for allegedly posting morphed image of Chief Minister Mamata Banerjee on social media and pulled up the West Bengal government for the delay in releasing her.

A vacation bench comprising justices Indira Banerjee and Sanjiv Khanna was informed by the counsel of activist Priyanka Sharma's brother that she was not released from jail on Tuesday despite the apex court's order granting her bail and ordering her immediate release.

However, the counsel for West Bengal government informed the bench that she has been released from jail at 9:40 am today. "Why 9:40 am today? The order was passed in your presence," the bench told the state counsel. When the state's counsel referred to the jail manual, the bench shot back, "Jail manual can't have precedence over an order of the Supreme Court."

"No. This is not done. First of all the arrest was prima facie arbitrary," the bench said. Senior advocate Neeraj Kishan Kaul, appearing for Priyanka's brother Rajib Sharma who filed the plea in the apex court, told the bench that despite the apex court's Tuesday order granting her bail she had to spend another night behind the bars. Kaul told the bench that jail authorities Tuesday told them that they have to either bring certified copies of the apex court's order or approach the court of the chief judicial magistrate concerned for her release.

"If she is not released, the consequences will follow," the bench said and warned it will issue contempt to officials concerned if Sharma was not released from jail immediately.

"If the Supreme Court was informed yesterday that the closure report has been filed in the trial court, then the apex court might not have asked her to apologise," Kaul said.

The apex court had Tuesday granted bail to Sharma and asked to apologise for posting the morphed image of Banerjee. During the hearing on Wednesday, Kaul said the counsel for West Bengal was present in the apex court during yesterday's hearing but did not appraise the court about the closure report.

"You know very well what happens to a counsel appearing for the state," the bench observed. To this Kaul said, "I am not on the counsel but I am on the conduct of the state." However, the bench told Kaul to check up whether Sharma has been released from jail or not. "If she is not released, we will issue contempt," the bench said.

However, Kaul said when the apex court had on Tuesday said that Priyanka should be released forthwith, why jail authorities did not release her.

"Does West Bengal state or the police have right to detain her even for a minute after the Supreme Court's order," Kaul asked. He told the bench that their application be listed for hearing next week. However, the bench said since Sharma has been released there was no urgency and the application will be heard in July after the summer vacation.

After taking instructions, Kaul told the bench that Sharma has been released from jail but jail authorities "forced" her to give an apology before being released from the prison.

Sharma was arrested on May 10 by the police under section 500 (defamation) of the IPC and under other provisions of the Information Technology Act on a complaint of a local Trinamool Congress leader Vibhas Hazra. She was sent to 14-day judicial custody by a trial court there.

The apex court, which initially said Sharma's apology will be a bail condition, later clarified that it will not be a condition for bail but she should apologise for sharing the post at the time of her release. The court had also sought response from West Bengal government on whether a person can be arrested for sharing a post or meme on social media and posted the matter for further hearing after the summer vacation.

On Monday, Kaul had mentioned the matter in the top court for urgent hearing, saying Sharma was forced to move the apex court as there was a complete strike in local courts till May 14 in Howrah and moreover, she had been remanded in 14-day judicial custody by a Howrah court on May 11. Section 500 of the Indian Penal Code (IPC) entails punishment for defamation with simple imprisonment for a term which may extend to two years, or with fine, or with both.

Sharma had allegedly shared on Facebook the photo in which Banerjee's face has been photo-shopped on to actor Priyanka Chopra's picture from the MET Gala event in New York. Her arrest was followed by protests from the BJP and other social media users.