The governor alleged that Banerjee, at her election campaigns, had “provoked her supporters, especially women, to oppose Central forces 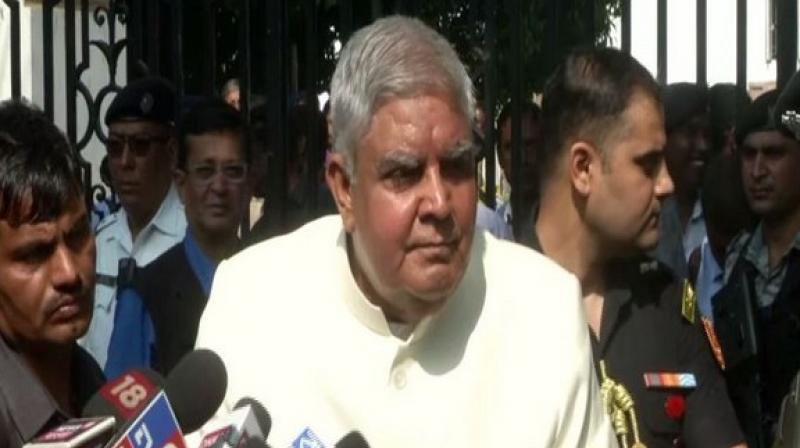 Guwahati:  West Bengal governor Jagdeep Dhankhar who on Friday visited western Assam’s Dhubri district and interacted with people who escaped from Bengal during post-poll violence regretted that West Bengal chief minister Mamata Banerjee was maintaining silence over the violence unleashed in the state after declaration of Assembly poll results on May 2.

Mr Dhankar, who visited a camp in Dhubri where several families from Bengal's Cooch Behar claiming to be BJP supporters are taking shelter, said, “Nothing can be more shameful for us than people of West Bengal taking shelter in neighbouring state of Assam.”

He alleged, “Even the media did not do anything. It is an open secret who the perpetrators were.” Asked about the law and order situation in the state, the Governor said that he was not in favour of confrontation but believed in cooperation.

“We are heading in the wrong direction and there can be a point of no return… the state of West Bengal is witnessing two big issues — Covid pandemic and post-election retributive violence. There was blood-shed and genocide in the state. I should not say much as the cases are under investigation but the chief minister's silence is a matter of concern for me,” he said.

The governor also alleged that Ms Banerjee, at her election campaigns, had “provoked her supporters, especially women, to oppose Central forces by various means"

“Such words do not befit a chief minister. It is extremely painful for me to see a chief minister do this. It is antithetical to the rule of law,” he said and added that a state government should be positive and progressive in its approach, but "I don't understand this dispensation's constant conflict with all -- the Centre, governor, Election Commission and the Central forces. This is against the very soul of the Constitution".

He said, “I had never imagined that I would have to go through such severe hurt and pain while discharging my duties as a governor. After the poll results were announced, West Bengal experienced blood-shed, arson, loot, violation of woman's dignity and rampant vandalism.”

"People flee from their homes and take shelter in other states only when they realise they are insecure and those entrusted with ensuring their security are unable to do their job. The situation is such in the state that people are scared of the police, and the police are scared of the ruling party (TMC) workers. Where is the rule of law?” he asked.

More than 175 people from West Bengal are taking shelter at a Ranpagli school in Dhubri district, bordering the neighbouring state. The Assam government has been facilitating shelter to them.

He also sought to know why human rights activists and NGOs have not tried to reach out to those affected by post-poll violence and highlight their plight.

“My hands are tied as a governor but where are the human rights activists, NGOs and journalists? Are they all wearing dark glasses?” said Mr Dhankar.