Floodwater has entered the houses in almost all the localities of the city making it look like an island. 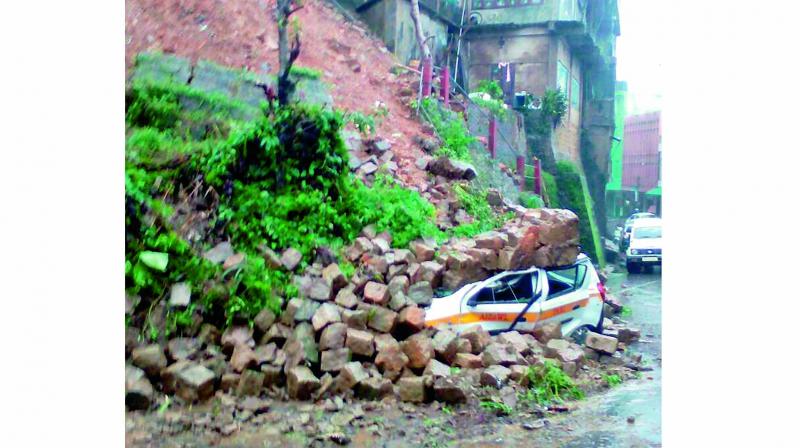 A vehicle is crushed after a landslide following heavy rains in Aizawl, Mizoram. (Photo: PTI)

Guwahati: The incessant rain since Monday has wreaked havoc in the capital city of Guwahati, disrupting normal life and killing four persons, including a minor, in an incident of flash flood-induced electrocution near the Assam State Zoo.

Flood water has entered the houses in almost all the localities of the city making it look like an island.

Even Assam chief minister Sarbananda Sonowal failed to reach his office at Janata Bhavan in Dispur due to waterlogging on roads. The district administration has ordered the closure of schools and other educational institutions on Wednesday. There were reports of landslides from some areas in the city also. Kamrup Deputy Commissioner M. Angamuthu said that among those killed included a school student and a man who were electrocuted on Zoo Road.

“We have ordered a probe into the incident,” he said. He said that rescue operations were on to help the marooned in different areas of the city. “We have set up five relief camps immediately at various locations in Guwahati and started distributing relief materials to people at these camps,” said Mr Angamuthu while clarifying that incessant rain that began on Tuesday morning has blocked the two main arterial routes in the city, triggering traffic congestion and submerging several localities.

Meanwhile, Mizoram chief minister Lal Thanhawla on Wednesday set up a high-level committee to assess the flood situation in the state where eight persons have died.

Several other northeastern states are taking stock of the situation following incessant rains since the last three days, which has triggered flash floods and landslides. In Meghalaya, a Disaster Management Authority official said all districts have been alerted following a warning from the MeT department about heavy rains in the state.

In Arunachal Pradesh too, incessant rains have thrown life out of gear.

In the state of Assam, the districts of Lakhimpur, Darrang and Hailakandi have been hit by floods affecting nearly 14,000 people in 39 villages  there, a report from the Assam State Disaster Management Authority (ASDMA) stated on Wednesday.

Over 400 hectares of farmland with standing crops have been inundated  due to incessant rains in the three districts.

The SDRF has pressed 10 boats to rescue 400 marooned people from Hailakandi district, the report said, adding that relief materials have been distributed among the flood-affected people in the state.