The delegation also sought making CCTV vigilance in every hospital mandatory and implementation of a hotline alarm system. 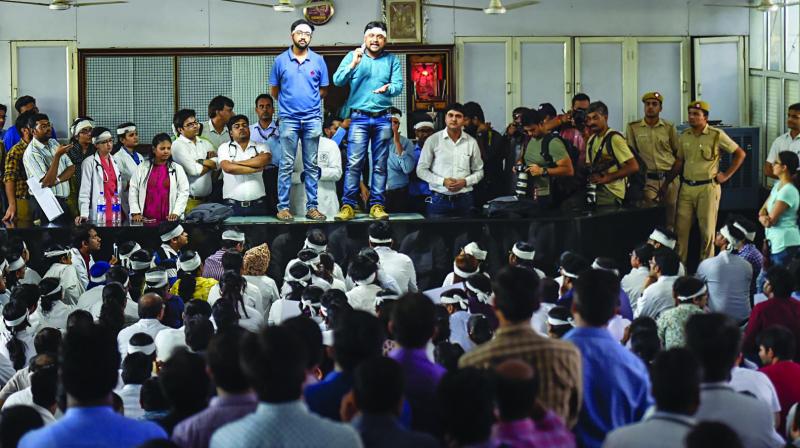 Members of Resident Doctors’ Association of AIIMS wear bandages on their heads in New Delhi on Friday to show solidarity with their counterparts in West Bengal. (Photo: PTI)

NEW DELHI: Patients suffered as health services in both government and private hospitals were affected across the country on Friday as doctors went on strike against the recent assault on doctors in West Bengal. As the protests by doctors intensified, Union health minister Harsh Vardhan urged West Bengal chief minister Mamata Banerjee to not make this sensitive matter a “prestige issue” and asked her to ensure an “amicable end” to the stir which started in her state and spread to other areas. The Indian Medical Association (IMA), an apex body of doctors, called for a strike on Monday while urging Union home minister Amit Shah to enact a Central law to check violence against health care workers in hospitals.

In a letter to Ms Banerjee, Dr Vardhan urged her to ensure an “amicable end” to the protests and provide a secure working environment for doctors.

He also appealed to the agitating doctors, particularly in West Bengal, to hold symbolic protests and resume work so that patients do not suffer.

The Union health minister said, “Doctors should resort to other simple and symbolic ways of protest. As medical professionals, their duty is towards protecting the rights of patients. Strike is certainly not the best way to protest. Patients
should not be deprived of immediate and emergency healthcare facilities.”

Junior doctors in West Bengal have been on strike since Tuesday after two of their colleagues were attacked and seriously injured allegedly by the relatives of a patient who died at NRS Medical College and Hospital in Kolkata.

Referring to Bengal doctors asking Ms Banerjee to provide them and take action against the perpetrators of the violence, Dr Vardhan said, “Instead of doing that, she warned them and gave an ultimatum which angered doctors across the country and they proceeded on strike.”

“I plead to the West Bengal chief minister to not make this an issue of prestige,” Dr Vardhan added.

The IMA launched a three-day nationwide protest from Friday to express solidarity with the doctors and called for a strike on June 17 with withdrawal of non-essential health services.

The association renewed its demand for a Central law to check violence against health care workers in hospitals said it should have a provision for a minimum of seven-year imprisonment to violators.

The Union health minister assured doctors that the government is committed to ensuring their safety and urged them to ensure that essential services are not disrupted.

Healthcare facilities were affected at several government and private hospitals across the country as doctors held demonstrations by marching and raising slogans to express solidarity with their protesting colleagues in West Bengal.

The Union health minister assured the delegation that he will discuss the matter of providing safety to hospitals with the home ministry and also take up the issue with chief ministers and health ministers of states.

Doctors in the national capital demanded recruitment of both “armed and unarmed trained competent security guards” at all government health facilities and increasing the number of security staff at hostels. The delegation also sought making CCTV vigilance in every hospital mandatory and implementation of a hotline alarm system.

Dr Vardhan has assured the doctors that he will look into their demands. AIIMS doctors took out a march on the campus with many wearing bandages on their foreheads while some worked wearing helmets. Resident doctors of the Safdarjung Hospital also took out protests on their campus.

Around 4,500 resident doctors in Maharashtra, including some 2,800 in Mumbai, went on a one-day strike.

In Hyderabad and other places in Telangana, junior doctors staged protests against the assault at major state-run hospitals, including Gandhi hospital and Osamania General hospital in the city, said P.S. Vijayender, a leader of the junior doctors association, in Telangana.

Similar protests were reported from Jaipur, Raipur, Chandigarh and Coimbatore.