The celebrations of India's win in what came to be known as "Operation Vijay" will be conducted on a nationwide platform from July 25-27. 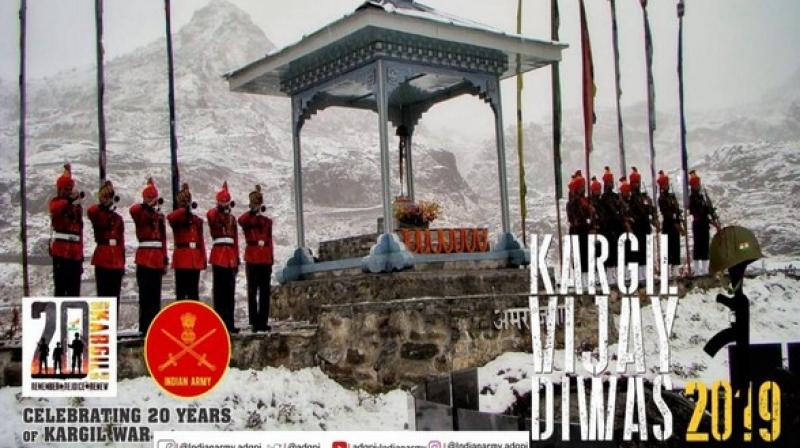 According to an official release, the theme for the day is 'Remember, Rejoice and Renew'. (Photo: ANI)

New Delhi: To mark the 20th anniversary of the 'Kargil Vijay Diwas' a number of celebratory events have been planned in Dras in Jammu and Kashmir and in Delhi.

The celebrations of India's win in what came to be known as "Operation Vijay" will be conducted on a nationwide platform from July 25-27.

According to an official release, the theme for the day is 'Remember, Rejoice and Renew'.

As a build-up to the main event, numerous activities have been organized all over the country starting from the first week of July beginning with the lighting of a 'Victory Flame' from the National War Memorial.

This flame will then travel through eleven towns and cities, to finally conclude at Dras wherein it will be merged with the eternal flame at the 'Kargil War Memorial'.

A 'Wreath Memorial Ceremony' will also be organised at the 'Kargil War Memorial' to honour the bravehearts.

Ladakh will be participating in a run called 'Ek Daud Shaheedon Ke Naam'. Reportedly, this run will include citizens from remote villages and the brave war veterans from far-flung corners of Ladakh.

The release also highlighted that among other sports activities, a 'T-20 Cricket Championship' will be organised in Ladakh at the NDS Memorial Stadium wherein teams from Indian Army, Indian Air Force and the Indo Tibetan Border Police (ITBP) will be partaking.

In New Delhi, a 'Commemoration Ceremony' will be organised at the Manekshaw Centre where a panel discussion with the war veterans and serving officers will be conducted.

This event will be followed by a 'Kargil Vijay Diwas Evening' at the Indira Gandhi Indoor Stadium on July 27.

The Year 2019 marks the 20th anniversary of victory in 'Operation Vijay', popularly known as the 'Kargil War'.