Congress claims people are tired of 'fake achche din' promises by BJP and are waiting for 'sachche din' when Modi departs as PM. 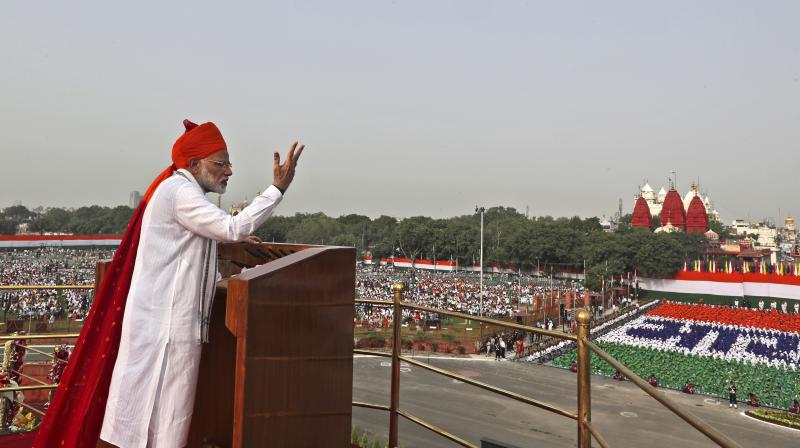 In his last Independence Day speech before Lok Sabha elections, PM Modi presented a picture of rising India under his government, contrasting it with what he termed was 'policy paralysis' under the UPA. (Photo: AP)

New Delhi: The Congress on Wednesday said Prime Minister Narendra Modi should have spoken "the truth" in the last Independence Day address of his term instead of making a "hollow" speech and urged him to accept party chief Rahul Gandhi's challenge of a debate on issues such as corruption, mob killings and Chinese incursions.

In his last Independence Day speech before Lok Sabha elections, PM Modi presented a picture of rising India under his government, contrasting it with what he termed was "policy paralysis" under the UPA.

Congress's communications in-charge Randeep Surjewala alleged that the Prime Minister in his address did not utter a single word that made any sense to a common person.

Surjewala claimed that people were now tired of the "fake achche din" promised by the BJP and were waiting for "sachche din" (days of truth) when he departs as the Prime Minister of the country.

In 2013, PM Modi had created a Red Fort-like replica in Chhattisgarh and from there he had challenged then prime minister Manmohan Singh to an open debate on the issues of corruption, China and Pakistan threatening the territorial integrity of India, falling rupee and failing economy, rampant unemployment as also discrimination vis-a-vis farmers and India's women, Surjewala said.

"We ask you Prime Minister Narendra Modi today, five years after you have taken over as Prime Minister, are you ready for a debate on these very issues with Congress president Rahul Gandhi. Will you debate on the issue of corruption and Rafale and Vyapam and other corruption scams of your government for you did not utter a single word from the precincts of the Red Fort on corruption," he told reporters at the AICC headquarters in New Delhi.

Rahul Gandhi had dared the Prime Minister to a debate on Rafale deal and claimed that he will not be able to answer his questions on the issue "even for a second".

Surjewala also asked if PM Modi was ready to open debate with the Congress president on issues such as the state of India's farmers, "mob lynching that is happening under the instigation and protection of BJP leaders" and "insecurity" of  women.

"You (Prime Minister) did not utter a word, whether on Bihar or Unnao or any other rape incident that happened in the country," Surjewal claimed, referring to the shelter home case of Bihar's Muzaffarpur district and the rape case in Uttar Pradesh's Unnao involving a BJP lawmaker.

"Will you today debate on the failing economy and falling rupee, for the rupee has hit a new low that is 70 and the trade deficit has gone over USD 18 billion. Will you today debate as to the manner in which China has occupied Doklam, they are intruding into Ladakh and has been engulfing India from all sides," the Congress spokesperson alleged.

He also urged the Prime Minister to debate on Pakistan-sponsored terrorism and "rampant unemployment" in the country.

The last speech of PM Modi's tenure as Prime Minister has proved to be "hollow" because he made a no mention of corruption in the Rafale deal nor did he say a word about the Vyapam or the PDS scams.

"He also did not talk about incursions by China in Doklam and other places. He also did not speak about the environment of hate in the country, on the conspiracy of making brothers fight and how people are killing each other, on how hate is being propagated on the basis of religion, caste, regionalism, colour, dress and food," Surjewala said.

"We wish that at least in his last speech, he would have spoken the truth, and if not 'Mann ki Baat', he could have at least done 'kaam ki baat'," Surjewala said, taking a swipe at Prime Minister's 'Mann ki Baat' Radio programme.

The Congress leader also said there was a need to fight a second struggle for independence -- from discrimination, unemployment, poverty, lack of opportunities and from empty rhetoric and promises.

Asked about PM Modi's remark that India's stature rose on the world stage in the last four years, he said the prime minister should not undermine India's contribution in the last 70 years.

India was always be a power and it did not happen in the last four years, he said, adding that the prime minister's statement of this nature was "myopic, parochial and uncalled for" on a day like the Independence Day.

"He makes promises to break them. His and his party's path has been one of spreading hate and divisiveness," Surjewala said.