India   All India  15 Aug 2018  Independence of judiciary: Do away with post-retirement appointments
India, All India

Independence of judiciary: Do away with post-retirement appointments

Commissions are a highly institutionalised tradition, a deeply ingrained feature of the political culture. 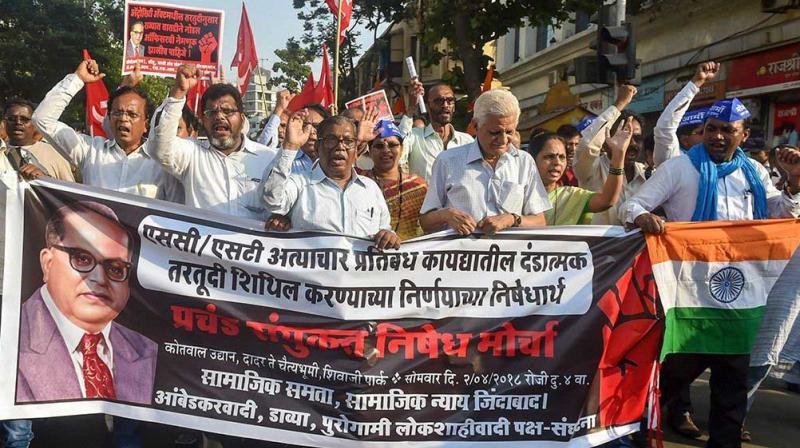 Dalit activist and supporters hold placards and raise slogans during a protest march against the alleged dilution of Scheduled Castes/Scheduled Tribes Act in Mumbai in April. (Photo: PTI)

Three Union ministers — Ram Vilas Paswan of the LJP, Ramdas Athawale of the Republican Party of India, and Upendra Kush-waha of the Rashtriya Lok Samta Party — have demanded the removal of Justice A.K. Goel as the chairman of the National Green Tribunal. All these parties are constituents of the NDA. But Paswan has watered down his stand after the government deci-ded to amend the scheduled castes (SC) and scheduled tribes (ST) Prevention of Atrocities Act, 1989, which has been allegedly diluted by the Supreme Court.

On last 20 March, a division bench of the court headed by Justice Goel issued directions against instant arrest under the act, and held that FIRs would not be registered without preliminary examination. These ministers have stated that his appointment has sent the signal that he has been rewarded for his judgment. Critics of the judgment are quite vociferous that the judgment effectively guts the act as the directions will make the registration of FIRs virtually impossible.

It is not unnatural for dalits and tribals to be dotty and soppy over the issue as the caste is a very touchy subject in India, but it is also a disturbing fact that many acts are being misused and abused. Section 498-A of the IPC is one such provision, and the same bench had issued directions to stop its rampant misuse. However, there was no agitation as it involved women, 50 per cent of the population, but no particular caste.

Judges are not impeccable; they can go wrong, and judgments can be subjected to searing criticism and it is often done. (Here I am not going into the merit of Goel’s judgment on SC/ST Act.) But to say that Goel has been rewarded for his anti-dalit judgment, and so he must be removed bespeaks of a feudal mindset that does not believe in the independence of the judiciary and wants ‘a committed judiciary’ as then Union minister Mohan Kumara-mangalam had openly advocated in 1970s.

It means, only those judges will be rehabilitated in tribunals and commissions who decide in favour of the government. And this is exactly the charge against the judiciary that its independence is being compromised as pre-retirement judgments are influenced by prosp-ects of post-retirement jobs.

The best solution is to put a blanket ban on post-retirement appointments, but so long as it does not happen, it should be done on merit so that judges decide without fear or favour.

George H. Gadbois, JR, after doing an extensive research on the judges of the Indian Supreme Court from 1950 to 1989, wrote, “India is a land of commissions — a ‘commission culture’ was the term used by one Chief Justice of India.

Commissions are a highly institutionalised tradition, a deeply ingrained feature of the political culture. The British made occasional use of judge-staffed commissions, but after Independence they have exploded in number. At any time dozens are functioning, providing many job opportunities for retired Supreme Court of India and high court judges… Not all commissions are established for noble purposes. Retired judges have acknowle-dged that some they headed were politically motivated, witch-hunts aimed at harassing political rivals.” ( Judges of the Supreme Court of India: 1950-1989, Oxford Unive-rsity Press, New Delhi, 2011, p. 371.)

It is not difficult to establish the quid pro quo between the government and the judge getting post-retirement jobs. Some judges never retire and move from one commission to another, and sometimes head more than one at a time. P.B. Gajendra-gadhkar headed six different official bodies while J.L. Kapur headed five. Judges who antagonise the government by their bold judgments, hardly get any such offers. None of the seven judges who rul-ed in favour of the basic structure doctrine in Kes-avananda Bharati, was asked to head any commission or tribunal nor was K. Subba Rao or M. Hidayat-ullah during Indira Gan-dhi’s first tenure. How-ever, the Janata Party’s government offered jobs of one kind or another to all the seven judges.

Now, apart from commissions, there are many tribunals which, according to statutes, can manned by former judges only though they are not suitable for those posts, which are highly technical in nature. Indira Gandhi was not happy with many judgments given by the Supreme Court and also many high courts, one of them by the Allahabad high court setting aside her election as an MP.

So, with Parliament under her thumb, she decided to transfer most of the judicial power to bodies which are directly under executive’s control. The beginning was made with the 42nd amendment. The jurisdictions of high courts were drastically curtailed under Articles 226 and 227 of the Constitution, and the concept of quasi-judicial tribunals was introduced.

The Janata Party government reversed many provisions of the 42nd amendment, and the Supreme Court also struck down many in Minerva Mills (1980), but Articles 323A and 323B, which opened the way for tribunalisation remained intact.

It is true that some acts provide that only former judges can head the official tribunal or commission or regulatory body. It is argued that if a ban is imposed on post-retirement jobs of judges, these acts would become unwor-kable.

This problem can be solved by making a minor amendment in the act which says that it will be headed by one who has been a judge of the Sup-reme Court/high court. Instead of ‘who has been’, it can be provided ‘who is’ so that only a serving judge becomes head or member of a commission or tribunal. The scope can be further enlarged by providing for eminent jurist or academic.

Most of the judges of the Supreme Court get some job or the other after superannuation. Justice Mukundkam Sharma was nominated to head the Central government appo-inted Vansadhara Water Dispute Tribunal at least four months prior to his retirement on 18 Sept-ember 2011.

People hardly know about this river. Justice H.K. Sema was appointed the chairman of the UP Human Rights Commis-sion by then UP chief minister Mayawati immediately after his retirement from the Supreme Court and the state government issued a special order that his office would be located in Noida and not in Lucknow, with houses at both places.

Curiously, earlier Justice Sema, while in the Supre-me Court, reversed most of the adverse findings agai-nst Mayawati by the Allah-abad high court. Similarly, Justice Swatanter Kumar was nominated to head the National Green Tribunal in December 2012, while still being on the bench of the apex court. Such instances abound.

There is a need to impose a total ban on any post-retirement jobs for judges. The proposal was mooted in the Constituent Assem-bly on 7 June, 1949, by Professor K.T. Shah and H.V. Kamath who wanted to introduce a new article that read: “Article 193-A — No person who has been a judge of the Supreme Court or of any high court — shall be appointed to any executive office under the government of India or the government of any state under the Union. The article even mentioned these executive offices, which included ambassadors and minsters, among others.

However, the proposal was defeated. The first law commission, headed by then attorney-general M.C. Setalvad, which submitted its report on 16 September 1958, recommended that judges of the higher judiciary sho-uld not accept any government job after retirement.

Senior TV journalist, columnist and author of Justice, Judocracy and Democracy in India, published by Routledge, and Judiciary versus Justice: Justice Enthroned or Entangled, to be published by Oxford University Press shortly.