India   All India  15 Aug 2018  Never witnessed anything like this before in Kerala’s history: CM on floods
India, All India

Never witnessed anything like this before in Kerala’s history: CM on floods

Rain red alert was sounded across Kerala on Wednesday after heavy rains continued unabated in most parts of the state. 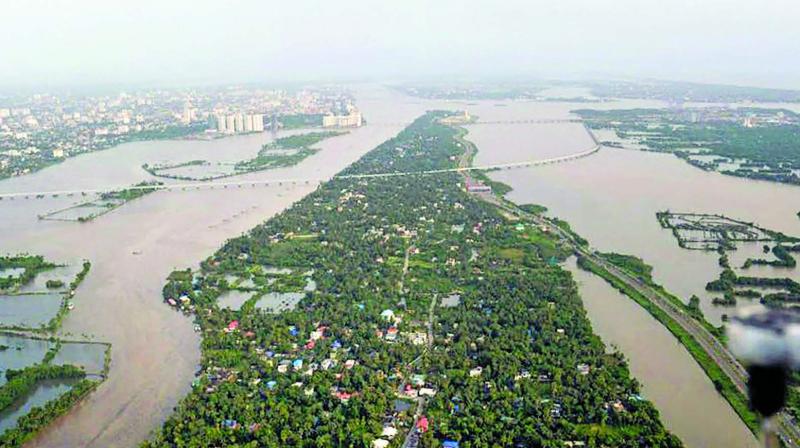 Around 17,900 people were shifted to relief camps in Ernakulam. (Photo: ANI/Twitter)

Kochi: With at least 44 lives lost since August 8 due to floods and landslides triggered by incessant rains in Kerala and situation in the state is turning grim, Chief Minister Pinarayi Vijayan on Wednesday said that the state is witnessing something that has never happened before.

“We're witnessing something that has never happened before in the history of Kerala. Almost all dams are opened. Most of our water treatment plants are submerged, motors are damaged. We're keeping all this in mind but our priority is to get drinking water to the people,” the Kerala chief minister said.

Rain red alert has been sounded across Kerala on Wednesday after downpour continues unabated in most parts of the state.

Flight operations at Cochin International Airport have also been suspended till Saturday, August 18.

Shutters of dams have been opened to release water from rivers which have swollen due to rains in the last few days. People living in the low-lying areas have been evacuated and moved to relief camps.

The Army, the Navy and teams of the National Disaster Relief Force (NDRF) are working on war footing to evacuate people from the flood-affected areas.

Around 17,900 people were shifted to relief camps in Ernakulam.

Tourist hill stations including Athirappally, Ponmudi and Munnar have been closed and restrictions put in place for tourists.

Kerala chief minister also said all officials are involved in the rescue and relief operations.

“The rain will continue for the next four days and we all need to be careful. The neighbouring states have been helping us and we need their help in the future too,” Vijayan added.