India   All India  15 Aug 2018  PM Modi breaks protocol to meet children at Red Fort; here’s what he told them
India, All India

PM Modi breaks protocol to meet children at Red Fort; here’s what he told them

Prime Minister Narendra Modi broke from the security cordon to enter an enclosure where children welcomed him with loud cheers. 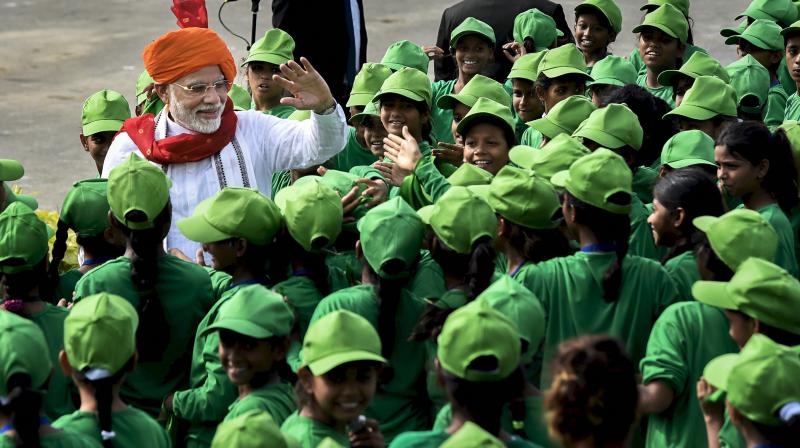 New Delhi: Children jostled to shake hands with Prime Minister Narendra Modi as he sidestepped his security cover to greet them after his Independence Day address to the nation from the Red Fort today.

After delivering an over 80-minute speech from the ramparts of the historic monument, he waved to the crowd and moved to his motorcade for departure. But, on his way out, he halted and broke from the security cordon to enter an enclosure where children welcomed him with loud cheers.

Dressed in colours of the national flag, the overwhelmed children jostled to catch a glimpse of the Prime Minister while those on the front rows even got an opportunity to shake hands with him.

PM Modi had last year also moved out of his security cordon to greet children on the occasion.

Shivani Pal, a class 7 student in government-run Sarvodaya Vidyalaya, was all smiles as she was among the lucky few who not only managed to shake hands with PM Modi but also got a chance to speak to him amid chaos. "He blessed me and asked me to study well. He also asked me to follow the motto of 'Sabka Saath, Sabka Vikas," she said, beaming with pride.

A class 9 student, Alisha, said it was a dream come true for her to see her idol and get a chance to speak to him. "He asked to study well and make the nation proud," Alisha said.

The crowd soon swelled to a huge mass of children who hankered to shake hands with him, prompting Prime Minister’s special security team to step in. As he tried to walk back to his car, the overenthusiastic crowd continued to swamp him even as he obliged the doting children with warm smile and gestures.

Eventually, the Prime Minister got some relief from the crowd, allowing him to move back to his car, after which the motorcade sped away.

Archana Rohilla, a teacher, said students from around 35 schools across the city have come to the event.