All docs in SHMS hospital’s ophthalmology dept have been told by superiors not to interact with media. 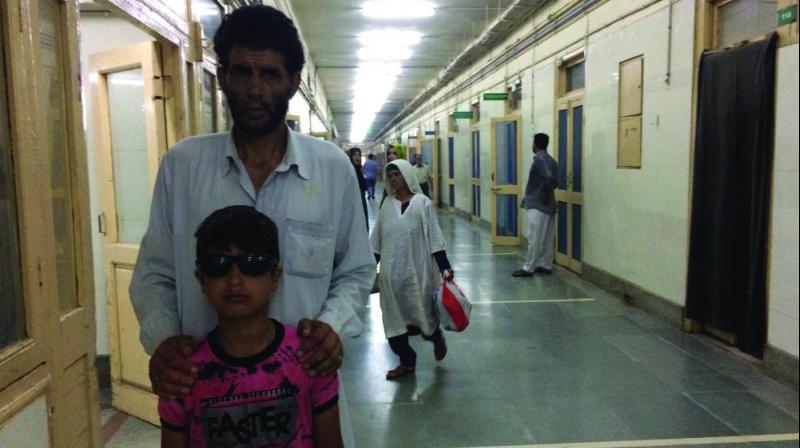 An injured child with his relative in Srinagar. (Photo: ASIAN AGE)

Srinagar: It was Id-uz-Zuha. Muneefa (4) was adamant about going out with her father, who was stepping out to buy essentials, for a ride on his two-wheeler. She sat in the front of the vehicle while her father, a resident of Safa Kadal in downtown Srinagar, rode to a nearby shop.

In a nearby lane, locals were protesting and, sensing danger, her father quickly turned back home when a sharp stone hit her eye. A security personnel nearby, who was trying to chase away troublemakers, had used a slingshot to target the protesters. It missed the malefactors and hit Muneefa in the eye.

This was on August 12 — when the Kashmir Valley was forced to celebrate Id under stringent restrictions. Muneefa was admitted to the SHMS Hospital that day and was discharged on Wednesday morning. She will now have to visit doctors frequently until her eyesight is restored.

While victims of stone-pelting and pellet firing have been frequenting Wards No. 7 and 8 of the SHMS here, the Jammu and Kashmir administration continues to be in the denial mode, saying these were “localised and very minor incidents”.

On Tuesday evening, four more Kashmiri youths, who had suffered pellet gun wounds, were discharged, clearly pointing out that all is not well in the Valley, except on main thoroughfares of Srinagar, ever since the Centre abrogated Article 370.

“Muneefa suffered a severe injury in her right eye. She was in terrible pain when she was admitted. The poor child was celebrating Id but ended up in the hospital,” one of the doctors, who attended on her, said. She was discharged this morning but will have to come back for regular check-ups. “She has lost her vision,” the doctor, who requested anonymity, said.

All the doctors in the ophthalmology department have been told by their higher-ups not to interact with the media, lest they face action.

Nine-year-old Mursaleen was seen sitting with his mother Ruhi in ward No. 8. Wearing black glasses, the boy was in excruciating pain even as doctors were attending to him. “We had gone to the market in our Alto to buy some essentials as few shops had opened in the evening. While returning, there was heavy stone pelting and we were trapped between the stone pelters and security forces. A boulder hurled by a protester landed on the windscreen and it was smashed completely. The glass pieces went flying around and a splinter pierced my son’s eye. Soon after the incident, we rushed him to SHMS for treatment. The doctors say he has lost his vision but they are hopeful he will regain it with surgery,” Ruhi said.

She regretted taking out her son with her to the market. “Children have nothing to do at home and schools are closed, so they insist on coming out at any given opportunity,” she said, holding back tears of regret.

While scared doctors were not willing to disclose the exact number of stone-pelting and pellet gun victims who were admitted and underwent treatment at the hospital, they said that five to 10 victims come in every day.

The hospital authorities have appointed the Principal of Government Medical College Dr Parvez Shah as their spokesperson but when approached, he refused to meet after being told that the information sought was regarding stone-pelting and pellet gun victims.

“Over the last 10 days since the lockdown, children have been the worst affected. Since all the schools are shut, they are forced to stay at home. They have no entertainment and cannot go out to play as restrictions are in force. It is affecting the psyche of children badly as they have nothing to do. Look what happened to those who ventured out like Muneefa and Mursaleen,” a senior woman doctor said.

She said that while doctors are leaving their homes for work, their children are forcing them to stay back. “At nights, children are unable to sleep alone in their rooms and all families are sleeping together in a single room for fear that something untoward may happen. When we have to visit hospitals, they are adamant that we leave our jobs and stay back home. They feel that we will be safe if don’t venture out”, she said.

Two more women doctors working in the dermatology ward shared their experience with the security forces, who they alleged have been harassing them in the name of checks. “There are 15 ambulances in the hospital. While most of the staff is unable to attend work due to restrictions, we doctors are dependent on ambulances to pick us up. But security forces who stop the ambulances at multiple checkpoints ask so many questions and check the vehicles so many times that we feel we should return home. However, patients need us and therefore we are bearing with the security forces, who view us with suspicion,” a doctor said.

Locals have also said that though the administration had ensured that emergency services would not be affected, they find it extremely difficult to reach the hospital as the forces do not allow them easy access to hospitals.