CM Reddy said, 'Freedom struggle is not just mere topic to read in history books instead it is great force that leads us to a good path.' 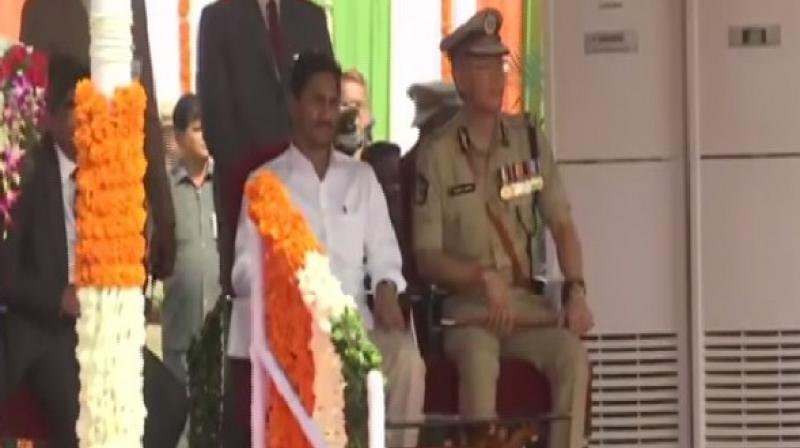 ‘British rule ended on August 15, 1947. But all other disparities are still continuing. What is our position in human development indices?’ the chief minister asked. (Photo: ANI)

Speaking at the event, Reddy said, the freedom struggle is not just a mere topic to read in history books instead it is the great force that leads us to a good path.

"British rule ended on August 15, 1947. But all other disparities are still continuing. What is our position in human development indices?" the chief minister asked.

The Chief Minister further said, "Agriculture, industries, service sectors saw much development, but corruption and middleman system is much more rampant. We have to change the political system which has no values. For that, we announced 'Navaratnas'."

"We have made acts to give share nominated posts and contracts to those who didn't yet get economic, social and political freedom. We asked power companies to reduce power tariffs. We asked contractors to reduce the cost of tenders quoted during the previous government, which was escalated for commissions. We have called for 75 per cent employment to locals in industries. Many are lamenting on these decisions. But we did not deter, as these decisions are in public interest," he said.

Speaking about policies of the state government, Reddy said, "Andhra Pradesh is the first state to form Backward Class (BC) commission on a permanent basis. BC does not symbolises backward class, but backbone class."

"We shut down all belt shops that sell liquor. From October 1, government alone will run liquor shops," he said.

"We enacted school education regulation and monitoring commission to change corporate education culture. We enacted judicial preview for irrigation and infrastructure contracts and introduced the reverse tendering system. Government purchases worth more than Rs 1 crore will be made online," he said.

Speaking about his government initiatives for agriculture in the state, Reddy said, "We decided to give Rs 84,000 crores crop loans from banks from this year. They will be interest-free if paid in time. We are giving 9 hours uninterrupted power supply for more than 60 per cent agriculture. We set up a market stabilization fund with Rs 3,000 crore. We took steps to repay Rs 384 crores to clear loans made by the previous government. We constituted Agriculture Mission. We are going to pay compensation for farmers who die accidentally or by committing suicide."

"The previous government did not clear loans to the tune of Rs 960 crores in collecting paddy. We will pay for that. Rs 2000 crores input subsidies will be released in this FY 18-19," he said.

"Under 'Rytu Bharosa' scheme, we are going to pay Rs 12,500 for every farmer from coming rabi season, i.e., October 2019. Total 55 lakh farmers including 16 lakh tenet farmers will be paid almost Rs 8,750 crores. This is history in the entire nation," the chief minister said.

"We are planning to divert Godavari waters to Nagarjuna Sagar and Srisailam reservoirs. For the 'Jala Yagnam' project works we will spend more than Rs 13,500 crores," he said.

"We are setting up village/ward secretariats for achieving gram Swarajya. One volunteer for every 50 families will be deployed with an honorarium of Rs 5,000. Thus we are going to provide 4 lakh jobs. It is a record in Indian history. There will be 50 per cent women in those volunteers," he added.

The Chief Minister further said, "Revolutionary "Amma Odi" (mother's lap) scheme will be launched from January 26. Every poor mother sending her children to school will be rewarded with Rs 15,000. We have increased welfare pensions from Rs 1,000 to Rs 2,250. Rs 250 will be increased in next 3 years. Then pension will increase to Rs 3,000."

Welfare pension eligibility age is reduced from 65 to 60 years. This is benefitting 5 lakh more people, he said.

"YSR Arogyasri" scheme is applicable to all those people with annual income less than Rs 5 lakhs and incur medical bill more than Rs 1,000. All of their medical expenses will be borne by the state government," he added.