Under the ‘Mukhyamantri Pratibha Protsahan Yojana’, 25 topper children will also be given scholarship of 50 pc fee in all courses. 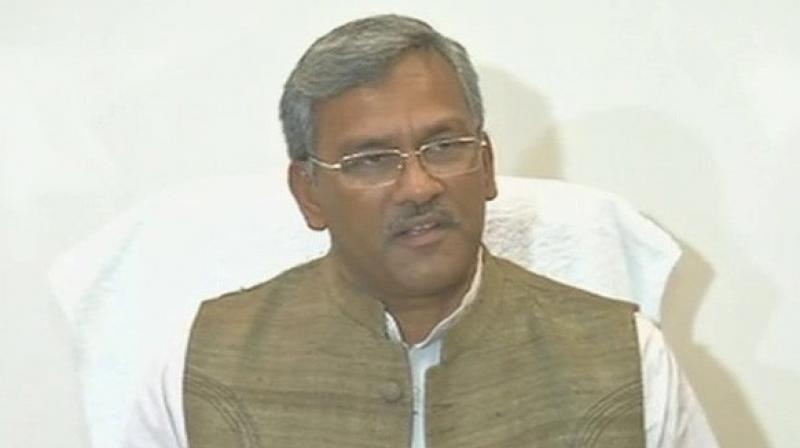 Rawat, while addressing the locals on the occasion, congratulated the cricket authority of the state after the Cricket Association of Uttarakhand got the full membership of BCCI on Tuesday. (Photo: ANI)

Dehradun: Uttarakhand Chief Minister Trivendra Singh Rawat extended his greetings on the occasion of Independence Day and paid respect to all freedom fighters as well as all the immortal martyrs and agitators of Uttarakhand state formation here on Thursday.

Making announcements on the occasion, the CM said, to promote women entrepreneurs, "State is going to launch Women Entrepreneurship Promotion Scheme which will benefit around 5100 women in a year".

Apart from this, under the "Mukhyamantri Pratibha Protsahan Yojana", 25 topper children will also be given a scholarship of 50 per cent fee in all courses, he said.

Rawat, while addressing the locals on the occasion, congratulated the cricket authority of the state after the Cricket Association of Uttarakhand got the full membership of BCCI on Tuesday.

Speaking on the different transport projects in the state, the CM said: "Many projects including the Datakali Tunnel have been completed ahead of time. The work of Dobra-Chanthi Motor Jhula Bridge at Tehri will be completed by March 2020. Work has also started on the Rishikesh-Karnprayag railroad."

"13 heliports are being developed in the state. Jolly Grant Airport is being made of international standard. Due to the initiative of the state government, cheap air services have been started for Dehradun, Pantnagar, and Pithoragarh under UDAN scheme. Today, Dehradun is connected to 23 cities of the country by air," he added.

Talking about the improvement in the education system of the state the CM said: "Colleges are being made smart campus. Efforts are also being made to keep the coming generations connected with their language and dialect. In Pauri, unique textbooks have been prepared in Garhwali language. Soon other bids will also be made."

Talking about medical facilities he said: "Under the Atal Ayushman Yojana, all the families of the state are being provided free medical facility up to 5 lakh rupees per year. So far, 60 per cent of the families have made cards and more than 60 thousand beneficiaries have been given the facility of free treatment."

"To promote women entrepreneurship, loans up to Rs 5 lakh are being provided to women self-help groups without interest. In Kedarnath last year, offerings of more than Rs 2 crore were sold by women's groups," Rawat said while talking on the terms of women empowerment in the state.

He said that "tourism is now becoming a source of livelihood for villagers through 'homestay'. 13 new theme based destinations are being developed in 13 districts."

Apart from tourism, he also said that the state has created "a favorable environment so that more and more films are shot in the state. This is the reason that 'Most Friendly State for Film Shooting' has also been declared by the Government of India."