Namgyal was greeted with a parade on his return to Ladakh earlier this week. 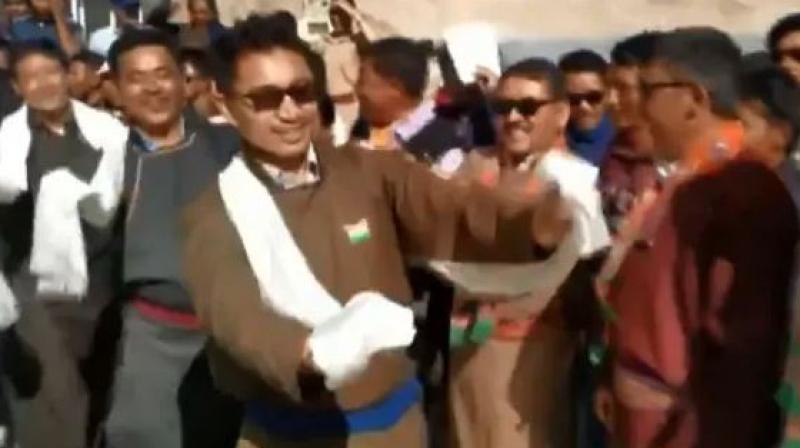 In the 28-second video, Namgyal was seen wearing sunglasses and a dark brown 'goucha' (traditional Ladakhi dress for men), and leading a line of fellow dancers. (Photo: Screengrab)

New Delhi: The BJP MP from Ladakh, Jamyang Tsering Namgyal whose speech in support of the government's move to scrap Article 370 went viral and earned praise from Prime Minister Narendra Modi, celebrated India's 73rd Independence Day with a short dance that was caught on video by news agency ANI.

In the 28-second video, Namgyal was seen wearing sunglasses and a dark brown 'goucha' (traditional Ladakhi dress for men), and leading a line of fellow dancers.

Tsering Namgyal, 34, emerged a hit on social media after a Lok Sabha speech backing the government's contentious decision to end special status for Jammu and Kashmir.

Namgyal was greeted with a parade on his return to Ladakh earlier this week. He posted a video of himself waving the Indian flag and dancing, again.

The residents believe firmly in the principal of environmental conservation. Following this norm, they have taken a pledge of no crackers even for the celebrations.
This video shows how celebrations can happen in an eco-friendly environment. #NewLadakh pic.twitter.com/tP3CNj0lym

In a tweet, PM Modi gave a shout-out to the Ladakhi politician, saying he had coherently presented aspirations of people of the region in his speech.

My young friend, Jamyang Tsering Namgyal who is @MPLadakh delivered an outstanding speech in the Lok Sabha while discussing key bills on J&K. He coherently presents the aspirations of our sisters and brothers from Ladakh. It is a must hear! https://t.co/XN8dGcTwx6