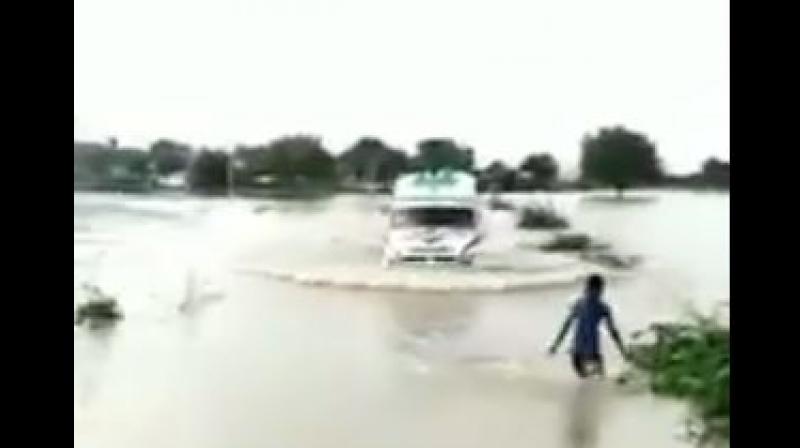 The young boy, identified as Venkatesh, a Class 6 student from a local government school, was reportedly playing on the banks of the stream, when the ambulance driver approached him for help. (Photo: video screengrab)

Bengaluru: In a video to watch out for, a 12-year-old boy displayed outstanding bravery in the devastating floods of Karnataka after guiding an ambulance through a completely flooded road due to the incessant rain. It had become impossible for the driver to distinguish between the road and the stream. The incident, which occurred near the Hirerayanakumpi village in Karnataka's Raichur district, earned the boy a bravery commendation on India's 73rd Independence Day, reported NDTV.

The young boy, identified as Venkatesh, a Class 6 student from a local government school, was reportedly playing on the banks of the stream, when the ambulance driver approached him for help.

Not willing to let down the request made by the ambulance driver, Venkatesh agreed to help and in a video of the incident, captured on the phone camera of a bystander, he can be seen determinedly wading through waist-deep water, even as he stumbles once or twice. Cheers of encouragement began to be heard as he neared the opposite end where many people began gathering.

Towards the end, when Venkatesh stumbled once more, one of the bystanders rushed to help him and pulled him to one side as the ambulance drove out of the water and continued on to the hospital, reported NDTV.

The ambulance was carrying six sick children and the body of a dead woman.

At least 60 people have been killed and seven lakh displaced across 22 districts in flood-ravaged Karnataka, where a further 15 people are still missing, as of August 14. The state government has set up more than 1,000 relief camps.

Nearly 60,000 houses have been destroyed. Chief Minster BS Yediyurappa has announced compensation of Rs. 5 lakh for the family members of those who died.

More rainfall has been predicted for interior regions of northern Karnataka till Saturday, with the Belgavi district likely to receive moderate to heavy downpours in some regions.