In his seventh straight Independence Day speech from the ramparts of Red Fort, Modi made a host of new announcements 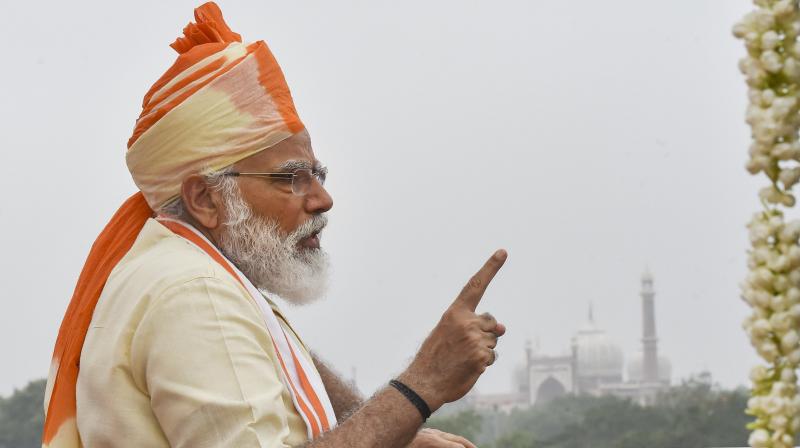 'Aatmanirbhar Bharat' was the centrepiece of Prime Minister Narendra Modi's Independence Day address as he presented a broad outline for spurring India's growth in diverse sectors and asserted that the coronavirus pandemic cannot halt the country's march towards self-reliance.

In his seventh straight Independence Day speech from the ramparts of Red Fort, Modi made a host of new announcements on Saturday, including the launch of a national digital health mission under which health IDs will be given to everyone, and connecting all six lakh villages with optical fibres in 100 days.

Dressed in his customary 'kurta pyjama' and safa, the prime minister, in his nearly 90-minute address, dwelt at length on his 'Aatmanirbhar Bharat' campaign and gave a call for reducing imports and pushing exports of finished products in place raw material, saying the country will have to move forward with the mantra of 'Make in India' as well as 'Make for World'.

'Aatmanirbhar Bharat' is no longer merely a word but has become a mantra and captured people's imagination, he said. Speaking of self-reliant India, he said many concerns are raised about it and acknowledged challenges ahead but asserted that there are "crores of solutions" offered by the country's citizens to "lakhs of challenges". Vocal for local should be the mantra of India, he said.

The hunt for vaccine

Modi also touched upon the much-anticipated issue of vaccine for COVID-19 and said three vaccines are in various phases of trials in the country.

"I want to tell people, the talent of our scientists is like that of 'rishi munis' and they are working very hard in laboratories. Three vaccines are in various stages of testing. When scientists will give us the green signal, there will be production on a mass scale and all preparations have been made for it," Modi said.

A roadmap has been prepared to ensure that the vaccine reaches everyone in the country in the shortest possible time with mass production, he said.

Hailing 'corona warriors', including doctors, nurses, paramedical staff and sanitation workers who have been continuously fighting the coronavirus pandemic, he said the country will achieve victory over coronavirus with the resolve of its over 130 crore citizens.

The Prime Minister announced that the task to connect India's over six lakh villages with optical fibre network will be completed in the next 1,000 days. Besides, a high speed internet connectivity via submarine optical fibre cable will be extended to Lakshadweep in this period, he said.

He pointed out that only five dozen panchayats in the country were connected with optical fibre cable before 2014. He said the country is witnessing expansion of roads and internet at unprecedented and rapid speed, from the peaks of Himalayas to islands in the Indian Ocean.

The prime minister also announced a new policy on cyber security to be unveiled shortly amid threats emanating from cyber space.

Modi, during his address to the nation, also announced a new digital health ID that will bring a "revolution" in the health sector in the country.

"From today, a big campaign is being launched in which technology will play a big role. The National Digital Health Mission is being launched today. This will bring a new revolution in India's health sector and it will help reduce problems in getting treatment with the help of technology," he said.

"Every Indian will be given a health ID. This health ID will work as each Indian's health account," Modi said. Every test, disease and diagnosis, and medical reports along with medicines will be stored in every citizen's health ID. These health issues will be resolved through this National Digital Health Mission, Modi said while announcing the scheme.

Modi also chose the occasion to deliver a warning to India's hostile neighbours saying the armed forces have given a befitting reply to those who challenged the country's sovereignty "from LoC to LAC" in their own language.

In a reference to the border row with China in eastern Ladakh, Modi said: "Respect for India's sovereignty is supreme for us and the world has seen in Ladakh what our brave jawans can do to maintain this resolve. I salute all those brave soldiers from the Red Fort."

"Whether it is terrorism or expansionism, India is fighting both with determination," Modi said.