A case has also been registered against former Ulfa leader Jiten Dutta who also spoke at the rally in Moran. 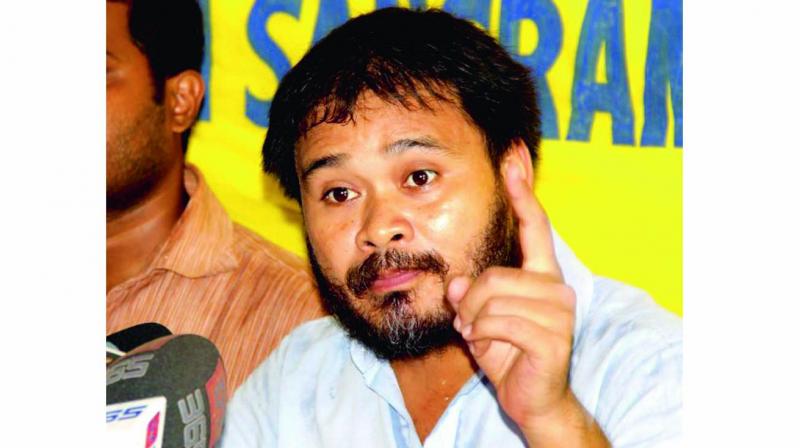 Mr Gogoi, who also heads the peasants’ rights organisation, Krishak Mukti Sangram Samiti (KMSS), was picked up on September 13 from the Golaghat office.

Police said: “Mr Gogoi, who addressed a gathering jointly with Jiten Dutta, a leader of pro-talk faction of Ulfa, instigated the common people to wage war against the nation and also delivered a speech against communal harmony.” It said, “They also announced that they would go for use of arms on non-fulfillment of their demands and they are ready to use ‘Hangdang’ (sword) and AK-47 rifle in their movement against the government.”

The arrest, made by a team of Dibrugarh police, was in reference to an FIR lodged at the Moran police station on September 13 against Mr Gogoi’s public speech a day before.

The police said that besides Section 124 A, Mr Gogoi has also been charged under IPC Sections 120 B (criminal conspiracy), 121 (waging or attempting to wage war against India), 109 (abetment of an offence), 153 (communal disharmony), and 153 A (hate speech).

A case has also been registered against former Ulfa leader Jiten Dutta who also spoke at the rally in Moran. He has been at the forefront of a state-wide protest after some businessmen assaulted surrendered Ulfa rebels who went to collect donation for flood relief in Nagaon.

Meanwhile, supporters of RTI activist has started protesting the arrest at various places and threatened to intensify it if Mr Gogoi is not released.