The garden has become a go-to spot in the area and attracts a crowd who pay a visit to appreciate the greenery and Mohanta's work. 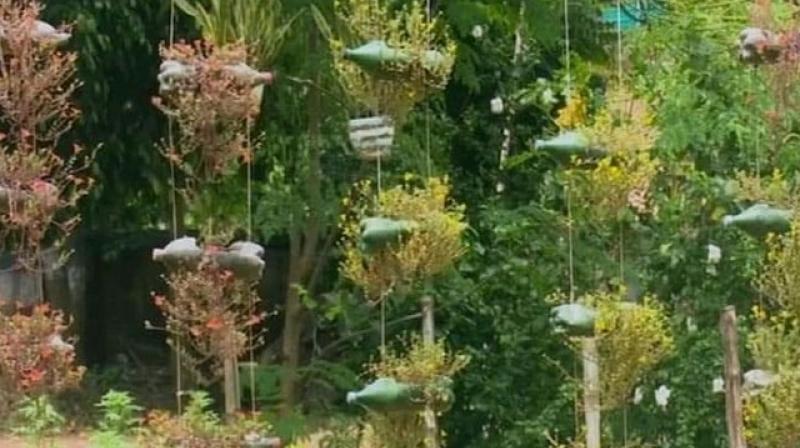 Papan Mohanta has been working to beautify the garden for the last four years and dedicates time to this cause after his usual work hours. Mohanta makes use of space in his Pirakata range office to create this unique garden.

"There was a lot of waste here when I first got posting here. I wanted to beautify the area. After working on it, I feel good after people appreciate it which visiting here", he said.

His experiments have become an inspiration for locals as some schools have also created such type of garden.

"I have been posted here for four years. I plant petunia in winters; right now there are seasonal flowers here. After seeing this garden, nearby schools also followed this method. CRPF jawans nearby did this too. It feels good when people take inspiration from you," he added. Mohanta used 1,100 waste plastic bottles and rubber tyres for the garden.

Subinoy Ghosh, a school teacher said that he is trying to replicate similar endeavour in his school and added that this message to conserve environment will become a big movement.

"We should learn from this garden to save earth in future and to reshape plastic. I think if this message can be spread through school or other media then it can also become a big movement. Whenever needed I also get plants from here. I hope nearby other nurseries and forest offices will also replicate this, which will influence nearby schools also," he said.

The garden has become a go-to spot in the area and attracts a crowd who pay a visit to appreciate the greenery and Mohanta's work.