India   All India  15 Sep 2019  Cops award traffic violators with helmets instead of challans in Hyderabad
India, All India

Cops award traffic violators with helmets instead of challans in Hyderabad 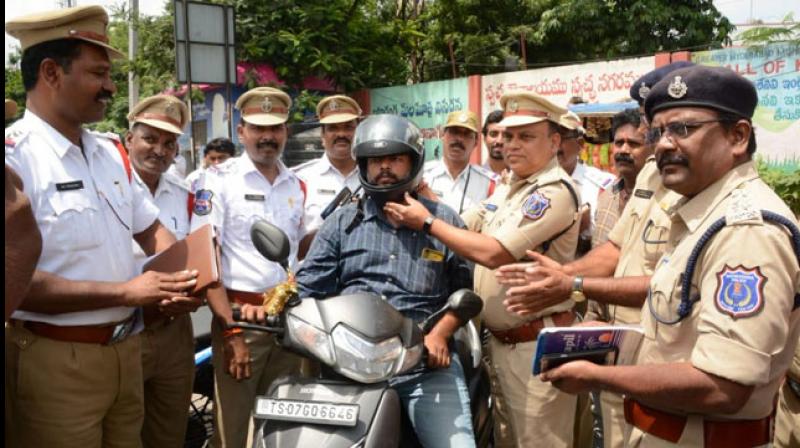 At a time when imposition of heavy fines for violation of traffic rules is evoking public anger in parts of the country, Rachakonda police commissionerate in Greater Hyderabad is trying an innovative method to make the motorists follow the rules. (Photo: Twitter/ @RachakondaCop)

Hyderabad: After a lot of hue and cry over the imposition of heavy fines for violation of traffic rules under Motor Vehicles Act (Amended), Rachakonda police commissionerate in Greater Hyderabad has taken an innovative method to make the motorists follow the rules.

The Hyderabad traffic police is facilitating the violators to buy the helmet or obtain necessary documents so that they don’t repeat the violations. Deputy Commissioner of Police (traffic) Divya Charan Rao launched the innovative drive on Saturday.

Commuters found without helmet were helped to buy the same on the spot while those not having documents like pollution checked or insurance were assisted to get the same from authorities concerned immediately. For the violators found driving without helmet, the traffic police got the slots booked online with the Road Transport Authority (RTA) to obtain the license.

However, the initiative by Rachakonda police won appreciation from people. Netizens hailed the move, saying imposing penalties is not the only solution to deal with violations.

Rachakonda is one of the three police commissionerates in Greater Hyderabad and covers the suburbs.

Hyderabad and Cyberabad are the two other police commissionerates in the city.